Five-man band in a beautiful tragedy 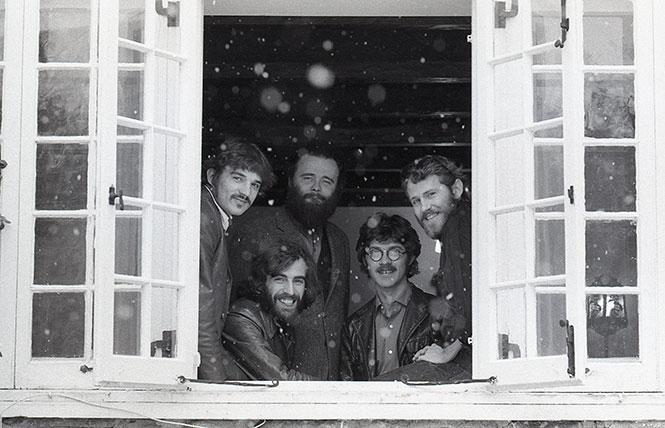 The Band in "Once Were Brothers: Robbie Robertson and The Band." Photo: David Gahr, Magnolia Pictures

In the opening frames of the fabulous rock-history memory piece "Once Were Brothers: Robbie Robertson and The Band," the one-time pretty boy and still quite handsome bandleader Robbie Robertson ruefully reflects on the human tragedy that overtook a group of five musicians who gathered in the late 1970s in a small upstate New York community with rules to break and worlds to conquer. "I don't know any other musicians with a story equivalent to that of The Band. And it was a beautiful thing. It was so beautiful it went up in flames."

"Once Were Brothers," opening Friday, is that rare film event that teaches without preaching. It's in fact one of the most entertaining cautionary tales in recent memory, a quality that is likely to land it on a host of top film lists (mine included). Even though I lived through the group's rocket-ship-like rise and fall — from roughly the end of the Beatles era in 1968 through the beginning of the Jimmy Carter years in 1976, when rural authenticity was ever-so-briefly in fashion — it's still hard to believe that this five-man band of bearded desperados, who became a must-play during my college radio DJ days in 1968-70, were professionally spent by 1978.

The filmmakers intersperse smart talking heads — Robertson, former Cream band member Eric Clapton and the film's producer Martin Scorsese — with sublime samples of their greatest hits — "Up on Cripple Creek," "The Weight" and "Rag Mama Rag" — to give context to the fate of five talented musicians who should still be working the rock nostalgia circuit.

New Jersey-born Bruce Springsteen lists the incredible assets The Band brought to their bid to be famous forever. "Not only did they have the incredible writing, Robbie's writing, but they had three of the greatest white singers in rock history. Any one of those guys would be the foundation for a great band, but to have all three in one group, that was just loaded for bear!"

Executive producer Martin Scorsese, whose film music credits include manning a camera on the stage at the 1969 Woodstock Music Festival, elaborates on the special musical roots that came together in The Band's joyful compositions. "This music drew upon country music — English, Scotch, Irish, Welsh, at the same time Mississippi Delta — and there was so much imagery, this didn't sound like anything else." Black blues legend Taj Mahal adds, "Nobody sounded like those guys. They came in and they played. I just loved that about them."

What happened, then? Canadian-born filmmaker Daniel Roher tries to balance the group's drug-fueled plunge over a cliff with their legacy. Robertson wistfully notes the heroin addiction that spread like a prairie wildfire through three of his band members, "I was confused that the guys wanted to play with that fire." He also reckons with their lasting contributions to several musical genres, including their partnership, controversial at the time, with Bob Dylan, such as in 1973's "Most Likely You'll Go Your Way (And I'll Go Mine)." The most poignant moments of the film feature Robbie Robertson watching footage of his now-deceased bandmates while pondering what might have been.

I love the sneaky guest-starring of Bob Dylan, who, approaching his ninth decade, has surrendered none of his nettlesome charisma. Did he lead the Band down the wrong path? I'll let you the filmgoer decide. "Once Were Brothers" is a must-see for music-lovers who still believe that rock stars, with all their grievous flaws, are among the most gorgeous creatures on earth.

A great idea would be to pair this new film with Scorsese's "The Last Waltz," a multi-rock-star 1976 documentary about The Band's farewell appearance.