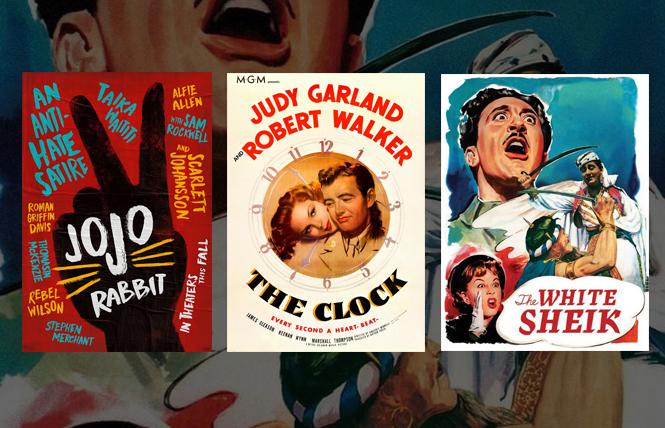 Nothing beats a post-Oscar hangover quite so well as a late February night at the Castro Theatre, where the programmers have booked a baker's dozen worth of traditional and freshly minted classics.

"Jojo Rabbit" In New Zealand filmmaker Taika Waititi's humane and daring black comedy, an imaginative and lonely 10-year-old German lad, Jojo (Roman Griffin Davis), joins the Hitler Youth, who appeal to him for their snazzy uniforms, martial spirit and seeming pathway to successful Nazi-era German adulthood. To his dismay, Jojo learns that his single mom (Scarlett Johansson) is concealing a young Jewish girl (Thomasin McKenzie) in their attic. Despite his imaginary pal Adolf Hitler (deftly played by Waititi), Jojo needs to face down his blind allegiance to the Nazi cause.

"A Hidden Life" Terrence Malick ("Days of Heaven") returns with the story of a humble Austrian farmer who chose to resist the Nazi war machine by claiming conscientious objector status during the height of WWII. Brought to the screen by a superb ensemble including Matthias Schoenoerts and the late Bruno Ganz. (both 2/13)

"Harold and Maude" Much of the late Hal Ashby's reputation as a hopeless romantic director rests on this February/December mad affair between a suicidal boy-man (Bud Cort) and a take-no-prisoners old lady played by veteran actress Ruth Gordon. Add the music of Cat Stevens, and you've got a road movie for the ages.

"Trust" Writer-director Hal Hartley's seldom-seen masterpiece about a runaway teen girl (Adrienne Shelly) who meets an adult on the skids (Martin Donovan). They decide to run their lives as a couple. (both 2/14)

"Casablanca" It may seem like this 1942 classic is the film most often appearing on the Castro schedule, but isn't that a good thing? Filmed while the outcome of WWII was still very much in doubt, Humphrey Bogart's toast "Here's looking at you, kid!" to Swedish-born beauty Ingrid Bergman can still prompt weeping jags from diehard romantics. It climaxes in one of the truly great homo-social fadeouts between two rugged guys: Bogart to co-star Claude Rains, "Louis, this is the beginning of a beautiful friendship!"

"New York, New York" The Martin Scorsese musical whose box-office and critical failure broke his heart led to a big career change: his very next film was the boxing classic "Raging Bull." Robert De Niro is the edgy jazz saxophonist to Liza Minnelli's ambitious singer, in the complete uncut version.

"The Clock" Vincente Minnelli directed this valentine to the charms and perils of a 1945 war-weary New York. Judy Garland and Robert Walker collide while he's on a two-day pass from the Army, finding instant chemistry while trying to pack a lifetime of memories into a frantic 48 hours. (both 2/16)

"Monty Python and Holy Grail" This laugh fest comes with a special treat: the Castro is supplying free coconut shells to early arrivals. Those who love this 1975 classic will know what the shells are for.

"Monty Python's Life of Brian" Graham Chapman plays a luckless martyr whose life parallels that of Christ, with all the problems that would entail. (both 2/19)

"The White Sheik" The first feature from Italian master Federico Fellini follows a couple on their honeymoon to Rome. The groom (Leopoldo Trieste) is dismayed when his bride (Brunella Bovo) drops him in favor of more worldly pursuits. (2/25-26)

"Uncut Gems" Comic Adam Sandler drops the shtick to play New York jeweler Howard Ratner, who pushes the envelope trying to sell an especially fine black opal. Written and directed by the brother team of Benny and Josh Safdie, this film is getting rave reviews where Sandler has never tread before. (2/27-28)

"The King of Marvin Gardens" An early-70s gem starring Jack Nicholson and Bruce Dern as ill-matched brothers in Atlantic City, in what turns out to be a lethal real estate scam. Nicolson has a gig as a late-night monologist who commutes on Philadelphia's decrepit streetcar. Dern is a desperate gambler in way over his head with a dangerous crowd. Nice supporting turn from Ellen Burstyn as Dern's deranged girlfriend. A unique slice of life from young talent on their way up. (2/27)

"Thief" James Caan is very convincing as a jewel thief living life on the edge. (2/28)