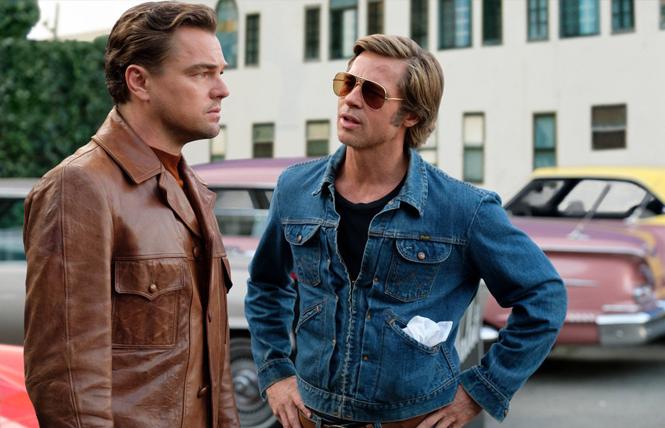 Leonardo DiCaprio and Brad Pitt in a scene from "Once Upon a Time... in Hollywood." Photo: Andrew Cooper/Sony Pictures

Best picture: Will Win: "1917." Should Win: "Once Upon a Time... in Hollywood." Director Quentin Tarantino evokes 1969 Hollywood in so many clever ways, even the Manson Family is upstaged.

Best actor: Will Win: Joaquin Phoenix, "Joker." Should Win: Antonio Banderas, "Pain and Glory." Banderas has been director Pedro Almodovar's dream leading man all these years, and now it's the actor's turn to portray the auteur. The gay role is the opposite of Banderas' big-screen image in every way imaginable, yet he nails it.

Best actress: Will Win, Should Win: Renee Zellweger, "Judy." Her singing doesn't hold a candle to the real thing, but whose could? Ms. Z gets the Garland gestalt, the whole tragic swirl at the end of Judy's life.

Best director: Will Win: Sam Mendes, "1917." Should Win: Quentin Tarantino, "Once Upon a Time." We're not even much of a Tarantino fan. But here the violence, while as always gratuitous, is cathartic.

Best supporting actress: Will Win: Laura Dern, "Marriage Story." Should Win: Scarlett Johansson, "Jojo Rabbit." SJ is up for Best Actress as well, but most deserves it for her difficult role in a risk-taking film.

Best original screenplay: Will Win, Should Win: "Once Upon a Time."

Best cinematography: Will Win: "1917." The entire-film-shot-in-(almost)-a-single-take thing is impressive, but director Aleksandr Sokurov did it with "Russian Ark" back in 2002, in the Hermitage, with the help of a symphony orchestra. Should Win: "Once Upon a Time."

Best documentary feature: Will Win: "American Factory." This will give the Academy a chance to bring the producing Obamas to the stage. Should Win: "Honeyland," from North Macedonia, a portrait of an elderly beekeeper, a brilliant study of resilience in the face of unrelenting capitalism.

Best international feature film: Will Win, Should Win: "Parasite" (South Korea). The most original film of the year. Director Bong Joon Ho does family drama, social comedy, economic critique and horror film, all at once, flawlessly.

The latest in our continuing series of Staycation holidays came when we were invited to the Grand Reopening of The Clift Royal Sonesta Hotel last weekend. The Clift was originally built in time for the Panama-Pacific International Exposition back in 1915, and now, 105 years later, it's been brought back to life with an extensive renovation.

Our main motivation was to assure ourselves that they hadn't messed with the iconic SF hotel bar the Redwood Room. During a festive party, over copious Moet Chandon champagne, we determined that the redwood paneling, the Art Deco chandeliers and sconces were all still there: a refreshed but respected sacred space.

That night from our room up on the 14th floor, we could see, over the tops of the Curran and Geary Theatres, a sliver of Union Square and the new San Francisco skyline beyond. Welcome to the 21st century, Clift Hotel!

Leonardo DiCaprio and Brad Pitt in a scene from "Once Upon a Time... in Hollywood." Photo: Andrew Cooper/Sony Pictures