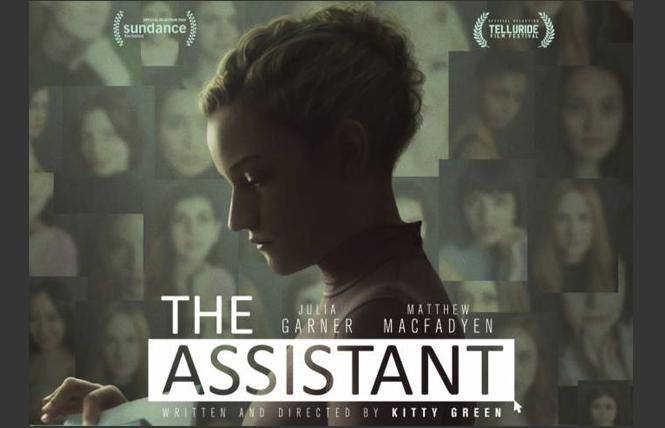 "The Assistant," opening Friday at Bay Area theatres, is a monster film where you never quite glimpse the monster. Inspired by the scandals surrounding disgraced movie mogul Harvey Weinstein, direct from its Sundance Film Festival debut, writer-director Kitty Green's film embeds us for 24 hours in the work-life of a young woman. Jane (low-key Julia Garner), a brand-new Northwestern U. grad, has landed what she believes is a plum entry-level job in the fiercely competitive indie-film industry. Later in the film, Jane is told there were over 400 applications for her gofer position.

Jane arrives for work in what feels like the middle of the night, in a part of Lower Manhattan that in bygone days was devoted to meatpacking and gay sexual assignations. Now, as Jane enters the building, it merely feels cold enough to keep meat fresh or preserve human corpses. Jane is the only woman in the office, staffed by handsome 20something boys (Noah Robbins, Jon Orsini) who flit about the office as if sharing an inside joke. Everyone treats "the office girl" politely at first. One young man dressed in black is mildly upset when his sandwich is chicken instead of turkey.

The work consists of people peering at screens: images within images. Jane answers the phone, fielding calls from an angry "big boss" and from his wife, demanding to know where the big guy is. Most humiliatingly, Jane, on her knees, finds a lost earring while scrubbing sticky fluids from the office's white couch.

Midway through the day Jane asks to see the guy at the company's Human Relations office. At first this hip 30something dude (Matthew Macfadyen) is sympathetic, but he gradually informs Jane that the way up the company's slippery ladder is to be deaf, dumb and blind to anything askew. Jane's most painful moment comes when she remembers that she's missed her Dad's birthday. In a phone call, Dad congratulates Jane for putting work before him.

"The Assistant" feels like an accurate if emotionally attenuated view of the battle lines in the digital workplace. Set a couple of years before the bubble burst at The Weinstein Company, the filmmakers leave you wondering how the #MeToo movement will replace the dead king. Hours after leaving the screening, I happened upon a TV news clip with Harvey Weinstein himself pushing his walker across a Manhattan street on the way to his trial.