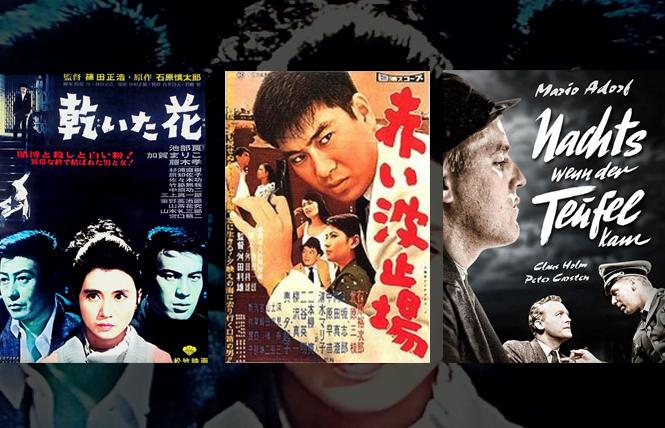 Eddie Muller's 18th Noir City film festival ends at the Castro Theatre on Feb. 2 with many memorable examples of the genre from foreign countries.

In "Pale Flower" ("Kawaita Hana") (1964), a gangster is released from prison but discovers that power has shifted in the underworld while he was away. He's also mesmerized by a young beauty whose reckless gambling leads to danger. With Ryo Ikbe and Mariko Kaga. Directed by Masahiro Shinoda. Screenplay by Shinoda and Masaru Baba, from the novel by Shintaro Ishihara. This is considered a masterpiece of Japanese noir.

What should two friends do after they witness a mob killing of one of their closest buddies? That's the dilemma posed by "Rusty Knife" ("Sabita naifu") (1958). If they tell the cops, they may meet the same fate. But if they don't, they have to live with themselves, with no guarantee they won't ultimately be murdered. This film offers no easy choices. Starring Yujioro Ishihara, Mie Kitahara, and Akiba Kobayashi. Directed by Toshio Masuda, who wrote the screenplay with Shintaro Ishihara, based on the latter's story. Both movies in Japanese with English subtitles. (both 1/30)

Robert Siodmark was born in Memphis, Tennessee, to German Jewish parents, but spent his boyhood in Germany. In 1940, he fled to Hollywood, where he directed many excellent noirs, including "The Killers" and "The Dark Mirror" (1946). In 1957, he returned to his ancestral homeland to helm "The Devil Strikes at Night" ("Nachts wenn der Teufel kam"). During the Nazi era, an honest cop hunting down a serial killer runs afoul of the Reich. He knows the wrong man has been arrested, but how will he see that justice is done? With Claus Holm and Annemarie Duringer. Written by Werner Jorg Luddecke and Will Berthold, from an article by the latter.

Germany in the years immediately following WWII was a bleak place, with chronic shortages of almost everything. "Black Gravel" ("Schwartzer Kress") (1961) depicts a frantic black-market trucker whose former girlfriend is married to an American officer, desperately attempting to cover up a fatal hit-and-run accident. Helmut Kautner's direction evokes the nightmare reality of the period. With Helmut Wildt, Ingmar Zeisberg, and sexy Anita Hofer. Both pictures in German with English subtitles. (both 1/3)

The Golden Age of Mexican movies was the 1940s and 50s, when many noirs were made there. In "Another Dawn" ("Distincto amanazer") (1943), a bored wife of a government bureaucrat (the strikingly elegant Andrea Palma) meets a former lover (Pedro Almendariz, who frequently appeared in American pictures), and sparks fly. He's a union member seeking better conditions for workers, being hunted by a corrupt politician. She wants to help him. The danger of doing so arouses her. With Alberto Galan and Narciso Busqueta. Directed by Julio Bracho. Written by Bracho, Xavier Villaurrutia, and Max Aub, based on his play. The memorable cinematography is by Gabriel Figueroa.

"Twilight" ("Crepusculo") (1945) is romantic but can be dangerous, as celebrated surgeon Arturo de Cordova realizes after becoming obsessed with the beautiful, scheming Gloria Marin. No longer able to function professionally, he recalls in flashback how he arrived at this juncture. Steamy, operatic, and riveting. Directed and written by Bracho.

In "Nightfall" ("La Noche avanza") (1952), Pedro Almendariz plays a successful athlete who is self-centered and untrustworthy. Many, including his mistresses (Anita Blanch, Rebecca Iturbe) and his rivals, want to do him in. Did one succeed? Directed by the acclaimed Roberto Galvadon, who, along with Jesus Cardenas and Jose Revueltas, adapted Luis Spota's story.

Beautiful Marga Lopez dances for money at the "Salon Mexico" (1949). She uses her earnings to pay for her sister Beatriz's (Silvia Delbrez) private school education. She lives in fear that her sister will learn the truth about her life. She wins a dance contest, but her pimp, Rodolfo Acosta, takes the prize money. While he's sleeping, she steals it. Will she get away with it? Directed by Emilio Fernandez. Screenplay by Fernandez and Mauricio Magdaleno, based on their story. All films in Spanish with English subtitles. (all four 2/1)

"A Woman's Face" ("En kvinnas ansikte") (1938) stars the brilliant Ingrid Bergman on the brink of major Hollywood stardom. She's a tough criminal boss with a disfigured face that has made her cynical and bitter. She meets a surgeon who can repair the damage. He changes her life, and she finds herself at risk for betraying her gang. Directed by the celebrated Gustaf Molander. Greta Stevens adapted Francis de Croisset's play. In Swedish with English subtitles. George Cukor remade the film in 1941 with Joan Crawford.

The great Andrez Wajda's "Ashes and Diamonds" ("Popiol i diament") (1958) graphically portrays the devastation in Poland following the defeat of the Nazis. Resistance fighters were forced to battle the armies of Stalin's USSR, their former ally, who now want to control the country. Haunting. With Zbigniew Cybulski. Wajda and Jerzy Andrzejewski wrote the screenplay, based on the latter's novel. In Polish with English subtitles. (both 2/2)