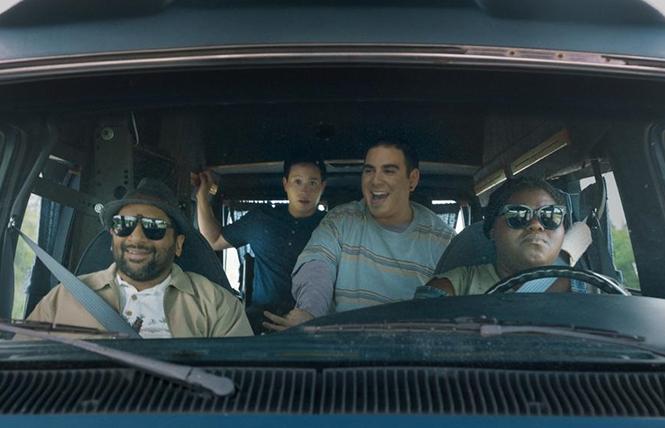 The 22nd edition of the San Francisco Independent Film Festival (SF IndieFest) is our local version of that great film launching pad, Sundance. It unspools at three venues: the Roxie (3117 16th St.), Victoria (2961 16th St.) and 518 Gallery (518 Valencia). IndieFest founder Jeff Ross gives good party, this year including "Big Lebowski Shadow Cast," "Super Bowl LIV: Men in Tights" (watch the big game with some of our best local comics) and "Bad Art Gallery" (the best of the worst art to be found at our city's thrift stores). The IndieFest 2020 Screenplay Competition is a free event where working writers hand out tips (518 Valencia, 2/1). Here are nine film capsules.

"Come As You Are" Bay Area director Richard Wong offers an off-beat road trip involving three disabled guys who disobey their overprotective parents by sneaking off in a van to find a place where they can get laid. (Roxie, 1/30)

"Big Fur" Dan Wayne's doc is a truly wacky Canadian take on an artist who believes in the existence of Bigfoot. A film with a poignant heart that connects the dots between "Psycho" and "Blue Velvet." The hero is world champion taxidermist Ken Walker, who fashions a life-sized female Bigfoot hoping that some hunter will pull the real deal out of a home freezer. Comes to us via 2020 Slamdance. (Roxie, 2/1, 4)

"The First Angry Man" Jason Cohn's doc flashes back to 1978, when a young Cal. Gov. Jerry Brown, who had rejected the priesthood in favor of his Dad's calling (former Gov. Edmund G. Brown), electoral politics, finds himself under attack by a rumpled old white guy from Utah. Howard Jarvis was hopping mad that property taxes were going through the roof. Thus was born Prop 13, a ballot measure that severely cut taxes for millions of middle-class homeowners while slashing funds available for schools, cops and firefighters. It's a compelling story about the ballot measure that became the "third rail" of California politics, a tax-cutting ideology that went national through the efforts of Republican presidents from Reagan to the Bushes, and finally Donald Trump. (Roxie, 2/2)

"The Tony Alva Story" A revelatory look at the rise and fall of the founder of the American skateboarding movement, who at 62 finds himself headed for a big and possibly fatal descent. Plays with the short "The World is a Skatepark." (Victoria, 1/31)

"The Wave" In Gille Klabin's feature, an insurance exec (Justin Long) enters his own twilight zone with the aid of a hallucinatory drug provided by a mysterious stranger (Tommy Flanagan). (Roxie, 2/1, 5)

"The Great Rock N Roll Swindle" A rare revival of Julien Temple's black-humor-infused portrait of the notorious 70s UK punk band The Sex Pistols. This is the real-life version of the characters portrayed in Alex Cox's classic narrative "Sid & Nancy." Spend a freaky 103 mins. with Johnny Rotten and the late Sid Vicious in this rare 35mm print. (Roxie, 2/7)