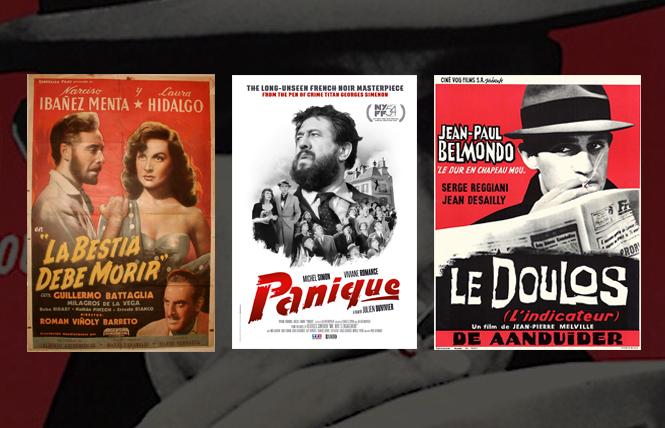 Argentina's "The Beast Must Die" ("La Bestia Debe Morir") (1952) is a taut thriller directed by Roman Vinoli Barreto. A nine-year-old boy is killed by a car. His widower father (Narciso Ibanez Menta) doesn't believe it was an accident. He defies the authorities to investigate for himself. The danger increases as he gets closer to the truth. But that doesn't stop him. With Laura Hidalgo and Guillermo Battaglia. Screenplay by Vinoli Barreto and Ibanez Menta from a novel by Cecil Day-Lewis (Daniel Day-Lewis' father) writing as Nicholas Blake. Shot on location in Peron-era Buenos Aires. This is a new, fully restored print.

Vinoli Barreto's "The Black Vampire" ("El Vampiro Negro") (1953) retells Fritz Lang's unforgettable thriller about a male pedophile, "M" (1931), from a feminist perspective: mothers protect their children from a predator. These women are strong and fierce. With Olga Zubarry, Roberto Escalada, and Nathan Pinzon. Adapted by Vinoli Barreto and Alberto Echebehere, from Lang's original story. Also shot in Buenos Aires, a year after Evita Peron's death. Both films in Spanish with English subtitles. (1/24)

As the following movies show, the French appreciated Hollywood's Film Noir before their American counterparts did. In Julian Duvivier's "Panic" ("Panique") (1952), a maid is murdered in a small town. Planted evidence incites a lynch mob. A social outcast is framed. Will he be executed while the killer goes free? With the beautiful Vivian Romance and Michel Simon. Screenplay by Duvivier and Charles Spaak from a Georges Simenon novel.

"Razzia" ("Razzia sur la chinouf") (1955) stars legendary Jean Gabin as a gangster determined to make the French underground drug trade more profitable. He learned the ropes in America. He uses his tough guy reputation to run the business. But he's being followed by the police. Will they believe that he's really a French government agent, working secretly to expose racketeers? With Marcel Dalio, Lino Ventura, and future Oscar winner Lila Kedrova. Directed by Henri Decoin. Adapted by Decoin, Maurice Griffe, and Auguste Le Breton from his novel.

As 1962's "Finger Man" ("Le doulos") proves, Jean-Pierre Melville was a master of Noir. Sexy Jean Paul Belmondo is a petty thief without honor. He betrays other crooks but plans a major heist with a colleague he trusts. Should he? Melville adapted Pierre Lesous' novel.

Henri Verneuil's "Any Number Can Win" ("Melodie en sous-sol") (1962) features Gabin as a veteran criminal just released from prison plotting one last major heist. Assisting will be a former cellmate, the astonishingly beautiful Alain Delon, whose unreliability disrupts their plans. A very suspenseful film, set in Cannes. With Vivian Romance. Adapted by Albert Simonin and Michel Audiard, from a novel by Zekial Marko. All films in French with English subtitles. (1/25)

"The Housemaid" ("Hanyo") (1960) is a Korean noir/soap opera about what happens when a respectable family man inadvertently hires an unstable housemaid to help his wife with daily chores. She seduces him, then gets pregnant. Things become very complicated. Written and directed by Ki-young-Kim. With Jin Kyu Kim.

"Black Hair" ("Geomeun meun") (1964) is an unnerving film about the raping of a yakuza's mistress by one of his henchmen. She's scarred and abandoned, but despite these horrors, plots her revenge. Directed by Lee Man-hee. Written by Woo-jeong Han. With Jeong-suk Moon. Both films in Korean with English subtitles. (1/26)

"Story of a Love Affair" ("Cronaca di un amore") (1950) marked Michelangelo Antonioni's directorial debut. Beautiful Paola (Lucia Bose) is married to a slimy, possessive factory owner (Ferdinando Sarmi) who's obsessed with her past. The private eye he hires to investigate unknowingly reunites Paola with an old flame (Massimo Girotti). They conspire to end her marriage. But will eliminating her husband also kill their passion? From a story by Antonioni, who adapted it for the screen along with Daniela D'Anza, Silvio Giavinetti, Francesca Maselli, and Piero Tellini.

"The Facts of Murder" ("Un maledetto imbroglio") (1960) begins with a thief stealing valuable jewelry from an apartment. No one is harmed. But the ensuing investigation creates unanticipated problems. Directed by and starring Pietro Germi, with Claudia Cardinale, Eleanora Rossi Drago, and Nino Castelnouvo. Written by Germi, Alfredo Gianetti and Ennio De Concini, from a novel by Carlo Emilio Gadda. Both films in Italian with English subtitles. (1/27)

In "...And the Fifth Horseman Is Fear" ("...a paty jezdec je Strach") (1965), a Jewish doctor risks his life to help a resistance fighter in Nazi-occupied Prague. Directed by Zybnek Brynych. Screenplay by Brynych, Milan Nejedly, Hana Belohradska, Ota Koval, and Ester Krombachova. With Miroslav Machasek. Fascinating location shots of Prague before tourists overran it. In Czech with English subtitles.

The English-Czech "90 Degrees in the Shade" ("Tficet jedna ve stinu") (1965) is also set in Prague. A government auditor discovers problems that have nothing to do with a grocery store's bookkeeping. With Anne Heywood, James Booth, and Ann Todd. Directed by Jiri Weiss from a screenplay by David Mercer. Based on a story by Weiss and Jiri Mucha. In English. (1/28)

"The Long Haul" (1957) stars Victor Mature as an American ex-GI driving trucks in England. But the business is run by the Mob, and he's in danger. With Diana Dors, Britain's answer to Marilyn Monroe. Directed and written by Ken Hughes from a novel by Mervyn Mills.

In "Never Let Go" (1960), Peter Sellers sells stolen cars brought to his chop-shop by teenage hoods. When Richard Todd, a struggling cosmetics salesmen, reports his car missing, the police don't respond fast enough for him. So he takes action himself. Sellers is surprisingly effective. Directed by John Guillermin. Screenplay by Alun Falconer from a story by Guillermin and Peter De Sarigny. (1/29)