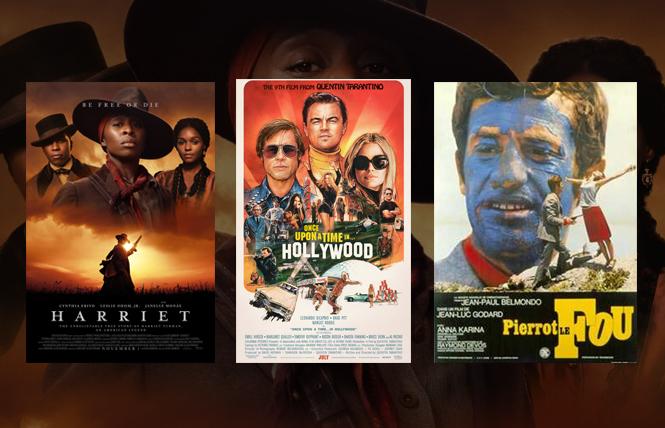 The year opens at the Castro Theatre with a bevy of special-event screenings including some under the banner of the 19th edition of the San Francisco Comedy Festival, or SF Sketchfest. The balance of the month is devoted to traditional rep programs and the 18th edition of the San Francisco Film Noir Festival. Host Eddie Muller presents "Noir City: International Noir II," nine days of noir films from Argentina, Czechoslovakia, England, Japan, West Germany, Mexico and Poland.

"The Shining" (1980) Iconic director Stanley Kubrick's scary take on Stephen King's horror story in which a family is pursued by vengeful spirits haunting a hotel. Jack Nicholson is wonderfully over-the-top as the recovering alcoholic who goes after his family (Shelley Duvall, Danny Lloyd) with an ax. "Here's Johnny!" (1/10)

"The Third Man" (1949) Arguably Orson Welles' best acting in a film he did not direct, Harry Lime is an outrageous villain who trades in tainted wonder, drugs and lies, getting his old wartime buddy, pulp-fiction novelist Holly Martins (Joseph Cotton), to front for him. With Anton Karas's zither-music score, a cool Trevor Howard as Lime's pursuer, and the actual sewers of Vienna brilliantly employed as a stage for Lime's final exit. Written by Graham Greene, with a shrewd take on early Cold War politics.

"Harriet" (2019) Kasi Lemmons helms the story of Harriet Tubman, the ex-slave who instigated the underground railroad series of escape routes for newly freed slaves. Tubman is the face due to replace slave-holder Andy Jackson on the $20 bill once Trump leaves the White House, one year to the day. (1/20)

"Once Upon a Time...in Hollywood" (2019) With his ninth and possibly final opus, Quentin Tarantino reaffirms his place in an elite class of master filmmakers who can employ a big-screen canvas to tell larger-than-life stories with black humor, suspense and pathos. It begins as a buddy film, with Leonardo DiCaprio and Brad Pitt as an action-film star and his drinking buddy/stunt double (Brad) facing the challenges of a changing cinema scene that finds them out of step: low-budget TV trumps classic Hollywood films. As the boys struggle to stay relevant, other Los Angelinos are caught up in their own forms of chaos, among them Sharon Tate whose fledgling film career is tied to the directorial skills of her Polish refugee husband, Roman Polanski. A band of violent hippies, led by mad guru Charles Manson, set out to murder screen actors they feel have planted dangerous thoughts in their skulls. Ultimately Tarantino provides his characters with a much kinder fate than their real-life counterparts. DiCaprio and Pitt are magnificent, with a terrific supporting cast including Bruce Dern, Dakota Fanning, Nicholas Hammond, Emile Hirsch, Timothy Olyphant, Kurt Russell, and in his final role, Luke Perry. (1/21-22)

"A Woman is a Woman" (1961) French master Jean-Luc Godard offers a musical homage to American musical comedies. An exotic dancer (Anna Karina), trying to have a kid with a reluctant boyfriend (Jean-Claude Brialy), starts to have feelings for his buddy (Jean-Paul Belmondo).

"Pierrot Le Fou" (1965) Belmondo and Karina are lovers on the run in perhaps Godard's most incendiary feature. (1/23)

"The Beast Must Die" (1952) A writer switches identities to catch the hit-and-run driver who killed his son. Adapted from a 1936 suspense novel.

"Panic" (1947) A social outcast is framed for the murder of a woman in a rural French village. The finest film in the storied career of director Julien Duvivier.

"Razzia" (1955) French legend Jean Gabin is a gangster trying to manage the influx of drugs into the Parisian underworld.

"Finger Man" (1962) Jean-Paul Belmondo is a shady character insinuating himself in the lives of career criminals, but is he a rat? A Jean-Pierre Melville crime masterpiece.

"Any Number Can Win" (1963) Aging mastermind Jean Gabin plots his greatest caper, but can he trust his super-sexy young apprentice (Alain Delon)? An underrated heist classic from Henri Verneuil. (all four, 1/25)

"The Housemaid" (1960) A middle-class Korean family spirals into a delirious nightmare after hiring a young housemaid. A unique mix of soap opera, noir, and horror from Kim Ki-young.

"Black Hair" (1964) The mistress of a yakuza is scarred and tossed aside after she's raped by one of his henchmen. Only she's not going down without a fight in Lee Man-hee's crime drama. (both 1/26)

"Story of a Love Affair" (1950) Investigation by a suspicious husband drives his young wife into the arms of an old flame. Unexpected tragedy ensues in Michelangelo Antonioni's debut feature.

"The Facts of Murder" (1959) A home break-in seems trivial until the victim's neighbor turns up dead. Pietro Germi's intricate mystery is equal parts thriller, policier, and black comedy. (both 1/27)

"And the Fifth Horseman Is Fear" (1965) A former doctor defies the Nazis by trying to save a resistance fighter during one long, surreal night in Prague. A Czech New Wave masterpiece.

"90 Degrees in the Shade" (1965) A liquor store audit results in life-altering revelations for everyone involved, guilty and innocent. A unique Czech-British co-production. (both 1/28)

"The Long Haul" (1957) A married G.I. in wartime Britain (Victor Mature) gets caught up with dishonest truckers and a tempting dame (Diana Dors), putting his life in danger.

"Never Let Go" (1960) A salesman whose car is stolen risks his life to retrieve it in London's underworld. Peter Sellers is the bad guy in a pre-Dr. Strangelove role. (both 1/29)

"Pale Flower" (1964) An ex-con falls under the spell of a reckless young gambler whose pursuit of danger has no limits.

"Rusty Knife" (1958) A young ex-con is enlisted to help bring down a yakuza boss, but he really wants to avenge the murder of his fiancé. (both 1/30)

"The Devil Strikes at Night" (1957) The hunt for a serial killer in Nazi Germany runs afoul of the Reich when the culprit doesn't fit their desired profile. Late classic by noir master Robert Siodmak.

"Black Gravel" (1961) A black-market trucker whose former flame is married to a U.S. officer tries to hide a fatal hit-and-run in Helmut Käutner's version of Cold War cinema at its bleakest. (both 1/31)