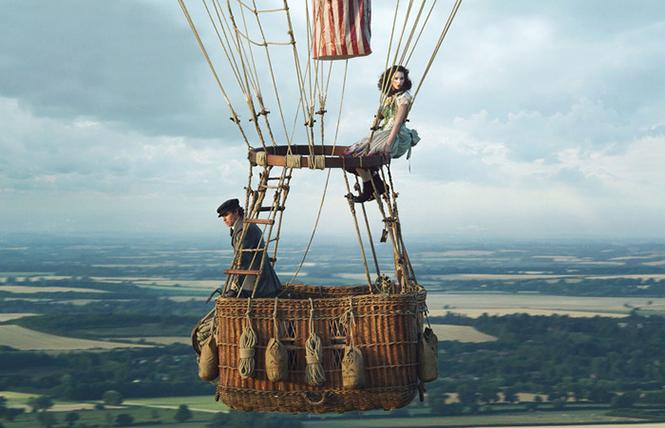 At the Castro Theatre the other night I watched actors Eddie Redmayne and Felicity Jones soar into the sky over jolly old England, circa 1862, in the breathtaking new Amazon Studios feature "The Aeronauts." I remembered that the feat depicted was the 19th century's version of space travel, and that I had thrilled as a boy to another version of this high-soaring adventure, Mike Todd's multi-Oscar-winning, three-hour epic "Around the World in 80 Days."

"The Aeronauts," which should certainly be viewed on a big movie screen, illustrates a cinematic version of what was once called future shock. In 1904, some patrons of the primitive Nickelodeons were frightened by a shot of a steam locomotive seemingly speeding straight at them. In 1956, audiences gushed and Oscars flowed at the sight of a British aristocrat (David Niven) and his manservant (comic actor Cantinflas) clowning their way across the globe in a widescreen take on Jules Verne's classic tale of man over nature. "The Aeronauts" director Tom Harper has to pack far more thrills into a much tidier package, a mere 101 minutes in 70mm widescreen, to get the buzz that all award-season releases demand these days.

Spoiler alert: The balloon is piloted by a woman (Jones' character is fictional), while Redmayne's role is based on pioneering scientist James Glaisher, determined to reach the clouds in a bid to invent modern weather-forecasting. Redmayne steals the film as a beautiful guy who nearly freezes to death for the sake of science. His fans should be grateful that their guy has returned from Harry Potter Land to give a 21st-century star turn.

Jones delivers as a young woman who shrugs off 19th-century naysayers to pilot the balloon. We get some truly hair-raising scenes as the pair nearly freezes to death at the top of the then-known airspace, leading to a nail-biting crash to earth. With a large supporting cast that includes veteran actors Tom Courtenay and Himesh Patel, "The Aeronauts" will appear both on big screens and on Amazon streaming through the holiday season.