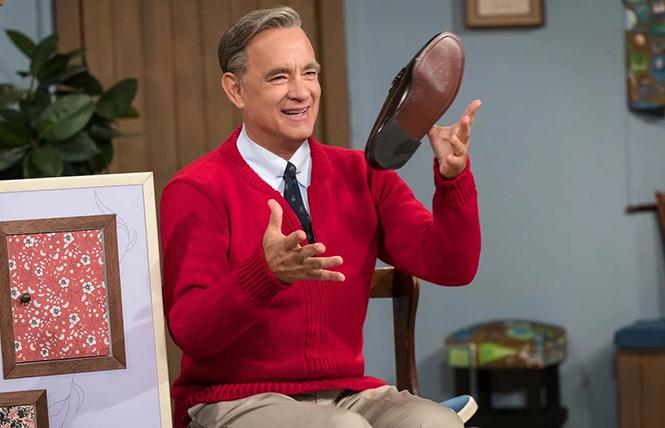 Those expecting to see a bio-pic of children's TV host Mister Rogers are in for a delightful surprise. In the new film "A Beautiful Day in the Neighborhood," Tom Hanks stars as Rogers not in the story of Rogers' life, but in a story about what he meant to people, how he changed lives with his simple, folksy charm. The film opened last weekend in area theaters.

Hanks offers a magnificent performance as Rogers, capturing the TV legend's essence. Hanks has the body language and the vocal mannerisms down, and even looks a bit like Rogers. It's eerie at times, as though Rogers, who passed in 2003, were still with us. But it's not a one-man show. Co-star Matthew Rhys is as much the star of the film as Hanks. Rhys previously played gay sibling Kevin in the prime time soap opera "Brothers and Sisters."

As the film opens, Mister Rogers is walking onto the set of his TV show. After welcoming viewers into his world, he shows the audience a picture board, opening little doors on the board to reveal his familiar characters. He also reveals the battered face of Lloyd Vogel (Rhys), a man who has seen better days. Vogel, who is based on real-life journalist Tom Junod, is an embittered man who's haunted by an episode from his childhood — his father had abandoned the family when Vogel's mother was dying. Vogel is a journalist for Esquire magazine, assigned to do a puff piece on Rogers. He grudgingly accepts the assignment in part because Rogers is one of the few subjects still willing to speak to Vogel. The writer has a history of throwing his subjects under the bus. 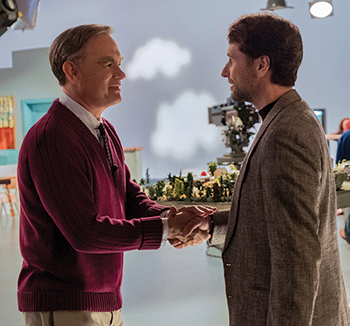 Vogel is, for lack of better words, a cynical, self-centered jerk who wallows in self-pity. He has a beautiful wife (Susan Kelechi Watson) who loves him and is herself a big fan of Rogers. The question remains, How much of Vogel's behavior can she take before her patience runs out? As Vogel embarks on a series of interviews with Rogers, his dad (Chris Cooper) reenters his life looking to make amends. The two get into a violent fist-fight.

Hanks and Rhys play off each other beautifully. While the film doesn't tell the story of Rogers' life, director Marielle Heller ("Can You Ever Forgive Me?") and Hanks capture who he was and the secret of his appeal. Mister Rogers was kind, he listened to people. He cared about them. What you saw on TV is what you got, a sweet man who was unafraid of approaching serious subjects, using puppetry and simple songs to convey his message and to get kids to understand what they were feeling. Rogers reaches out to Vogel and does for him what he does for his TV viewers, enabling Vogel to heal from his past. It's a beautiful story.

"A Beautiful Day in the Neighborhood" serves as a lovely companion piece to "Won't You Be My Neighbor?," last year's sweet documentary about Rogers. Like the earlier film, "Beautiful Day" reminds us of how much Fred Rogers gave to the world while not forgetting that he was, after all, only human. Rogers touched many lives with his simple humanity. This is but one of his stories.