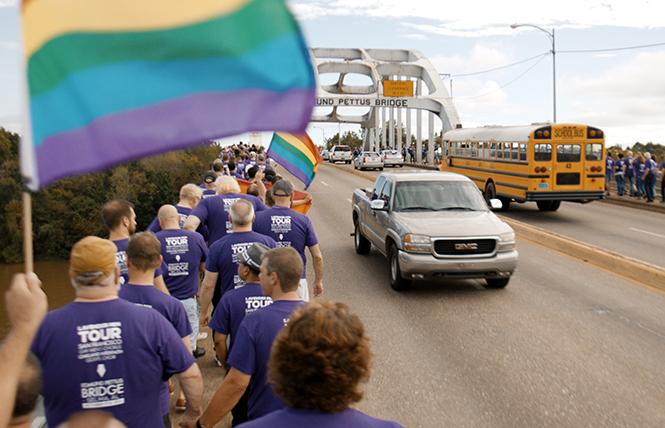 The San Francisco Gay Men's Chorus showed tremendous courage in the aftermath of Donald Trump's ascension to the presidency and the passage of "religious freedom" laws that legalized LGBT discrimination in conservative states. Joined by the Oakland Interfaith Gospel Choir, they embarked on a tour of the Deep South, performing for a largely Christian audience in churches, concert halls and community centers. The idea was that in order for laws to be changed, hearts and minds must be changed first. The result was a transformative journey for both the audience and for the members of the chorus.

That journey has been documented in the new film "Gay Chorus Deep South," which was the closing night film at Frameline 43 this past June, and now opens on Nov. 22 at the Roxie Theatre. Directed by David Charles Rodrigues, "Gay Chorus Deep South" is a powerful work in which people from different backgrounds strive to find common ground. 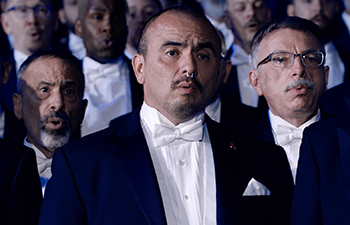 There are many moving stories in the film. Dr. Tim Seelig, the chorus' Artistic Director, recalls coming out at age 35 when he was working as Associate Minister of Music at First Baptist Church of Houston. Seelig lost his job, his home, his family and his friends. For Seelig, the Deep South tour is a stark reminder of all he went through. But he forges on, determined to spread his message of love and inclusion.

Rodrigues' camera follows the chorus on their journey as they travel through states like Mississippi, Tennessee, and the Carolinas. These are some of the most conservative states in the country and have some of the worst anti-LGBT laws on the books. While they do face some protesters, they also find many people embracing them. The tour also serves as a catalyst for some chorus members to reconnect with family members. One chorus member who suffers from cancer is visited by his father and stepmother, with whom he had not had a conversation in years, when the chorus appears in Mississippi. It's a happy reunion and a moving moment when the gay son and the conservative Christian dad reach out to each other and find common ground.

There are also scenes of the chorus in performance, and the music, much of it gospel, is beautiful. There's a lovely rendition of "Amazing Grace." The chorus, with its haunting unified voices, turns it into a plaintive call for building bridges.

"Gay Chorus Deep South" shows that it's possible for LGBT people to co-exist with the Christian community. It's not going to be easy to make that happen, but the chorus' tour and the subsequent film are a good first step.