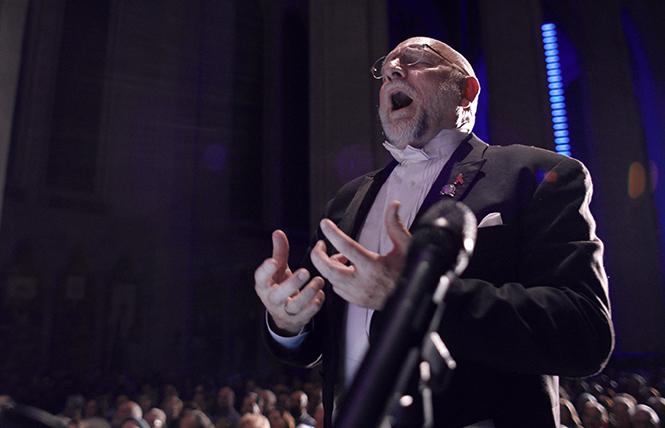 "Gay Chorus Deep South" embeds us with members of the San Francisco Gay Men's Chorus as they and their truly fearless leader embark on a four-state tour through Trump Country. For Artistic Director Tim Seelig, the trip brings up painful memories of his past life as a heterosexually married member of a Houston, Texas Baptist Church. Seelig's decision to come out resulted in First Baptist leaders expelling him from their fellowship at the same time his wife took off with his young sons.

Director David Charles Rodrigues' film explores a wide swath of issues confronting LGBTQ people in Dixieland states swept by Trump. The film takes special pains to note the growing number of anti-LGBTQ laws emerging from solidly Republican legislatures throughout the former Confederacy. But the dramatic heart of the film unfolds in a conversation Seelig has with a hypocritically pious Southern pastor at the Holly Grove Baptist Church, whose front lawn bears the sign, "God Is the Supreme Court." In his church office, Pastor William Pender makes clear to Seelig that he's fiercely opposed to the emergence of an LGBTQ political movement within his congregation.

"If it smells of demonstration, if it smells of in-your-face, then I'm going to get pushback. My job is to keep saying there are ways for us to hold the center here. So the idea of [gay activism] just rubs me wrong."

Seelig dismisses Pender's tokenism: "I have found that not to be enough, because it means, 'Oh, bless your heart.' Then you go home and just rail and scream into a pillow. So the level of being hospitable is just not good enough for me anymore. Because you can stab me in the back while you're hugging me. And I'm not interested in being 'tolerated.' The harder step is to celebrate the uniqueness."

To which Pastor Pender replies, "I just haven't felt the urge to do that."

The scene ends with the two men staring each other down, in a clear sign that tolerance of queer folks doesn't extend far beyond this office in the heart of Trump-leaning Dixie. Later in the car, Seelig explains to his friends, "I've lived that very painful Southern veneer of 'We're hospitable to all,' and that veneer is basically bullshit!" He adds that in his experience, the Southern Baptists were not interested in diving too deeply into modern relationship problems for which their Jesus had no easy answers.

Fueled by fantastic choral music and the power of love from an amazingly diverse and talented chorus, this film captures the heart and soul of a contemporary civil rights movement whose members won't rest until rainbow flags begin replacing still-visible Confederate banners. (Opens Friday.)