Tabloid horrors of The National Enquirer 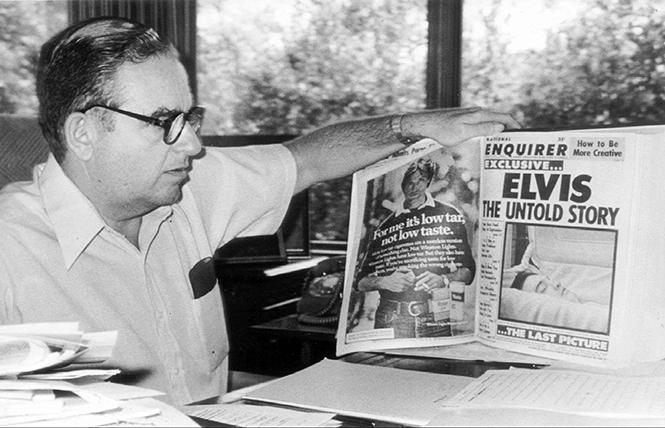 In his detailed and bitterly funny new doc "Scandalous: The Untold Story of The National Enquirer" (opening Friday), director Mark Landsman provides an incisive history of that supermarket checkout-counter tabloid, while also demonstrating why all roads seem to lead to the embattled Trump presidency.

Landsman begins with a saucy bit of Gotham history straight out of "The Godfather." The Enquirer was the brainchild of Generoso Pope, Jr., whose dad had made a small fortune as publisher of the large-circulation New York Italian American daily El Progresso, a position that reportedly garnered him membership in the New York City Mob. Wanting to do his own thing, the son bought (rumor has it, with Mob money) The Enquirer, a small horse-racing tip-sheet, in 1952. Renaming it The National Enquirer, Pope proceeded to hire a room full of gossip-trained British journalists.

At first Pope's paper was awash in blood, meaning a lurid collection of police-blotter items: gruesome traffic accidents, gangland assassinations and the like. Pope soon discovered that bloody front pages did not go over well at grocery-story checkout counters, so he tweaked the content to favor the bizarre over the bloody. "LSD Made Me a Prostitute" was a fairly typical headline.

"Scandalous" draws heavily on tales from its mostly retired former staff, who describe the joys of pursuing "If it bleeds, it leads" stories with the help of their publisher's virtually unlimited budget. Archival newsroom footage reveals a staff constantly on the phone, everyone smoking up a storm. "It's a wonder we didn't all get lung cancer." There's a hilarious account of how the paper acquired one of its most notorious scoops, a picture of a dead Elvis Presley in his open coffin (an issue that sold nearly 7 million copies), as well as discussion of one of the tabloid press' darkest deeds: the pursuit of the late UK Princess Diana, leading to her death in a Paris auto tunnel crash.

"Scandalous," which uses excerpts from a CBS "60 Minutes" Mike Wallace-reported story, demonstrates how, by the Reagan 80s, The Enquirer had moved past relatively innocent coverage of the rich and famous to politically consequential muckraking pieces on the sexual transgressions of former Colorado Senator Gary Hart and President Bill Clinton. The film then jumps to the present day, and charges that the paper has assisted Trump with keeping his own unruly private life out of more serious publications by the old scandal-sheet practice of "catch and kill" journalism. Women with stories about the president's behavior are paid for their tales by The Enquirer, which does not print them, but does bar the subjects from taking them elsewhere through legally binding non-disclosure agreements.

More recently, The Enquirer has a new owner, David Pecker, who seems to be taking the company in a dangerous new direction by publishing a slick mag supporting the interests of the Saudi Arabian monarchy, whose prince has been credibly linked to the murder of a Saudi-born Washington Post journalist. The film also details how celebrities Bob Hope, Bill Cosby, and Arnold Schwarzenegger were either protected or outed in a climate of tabloid frenzy. Significantly, Landsman neglects to cover former TV variety star Carol Burnett's successful 1981 libel lawsuit. At least "Scandalous" attempts to jumpstart a long-neglected national conversation about ethics, privacy and just what the news-consuming public has a right to know.

Inevitably, The National Enquirer has contributed to some useful reporting on subjects as far afield as the O.J. Simpson case and the 1979 San Francisco City Hall riots following the Dan White trial verdict. While preparing this review I noticed the most recent Enquirer issue, with former NYC Mayor Rudy (now Trump's personal attorney) on its cover in connection with what appears to be a nasty divorce settlement.

In the late 90s, The Enquirer printed full-color photos of the bullet-riddled bodies of the Columbine school killers. Was this mere sensationalism or a record of a kind of rough justice for the victims and their survivors? If there is any value to papers like The Enquirer, it may lie at this most uncomfortable juncture.