Ghoulish delights on the big screen 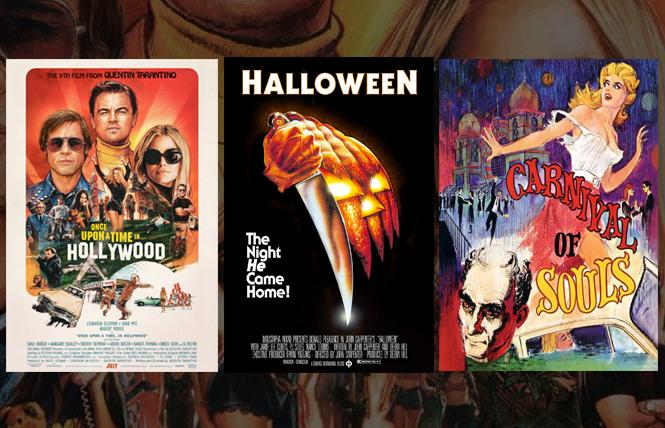 In a city where Halloween is taken really seriously, the Castro Theatre has film fare to bring out the ghoul in you.
"Once Upon a Time in...Hollywood" With his ninth and possibly final weird opus, Quentin Tarantino reaffirms his place in an elite class of master filmmakers who can use a big-screen canvas to tell larger-than-life stories with black humor, suspense and pathos. It begins as a buddy film, with Leonardo DiCaprio and Brad Pitt as an action-film star (Leo) and his drinking buddy/stunt double (Brad). They're facing the challenges of a quickly changing cinema scene that finds them out of step with an entertainment world that favors low-budget TV over classic Hollywood film tropes. As "the boys" struggle to stay relevant in the world of Western shoot-em-ups, other Los Angelinos are caught up in their own forms of chaos, among them Sharon Tate, whose fledgling film career ("The Fearless Vampire Killers") is tied to the directorial skills of her Polish refugee husband, Roman Polanski. Gradually we become aware of a band of violent hippies led by a mad guru, Charles Manson, who set out to murder the class of screen actors who they feel have planted dangerous thoughts in their skulls. Ultimately Tarantino provides his characters with a much kinder fate than their real-life counterparts.

San Francisco Greek Film Festival: "Olympia" Bio of the now-80-year-old Olympia Dukakis is the opening-night treat of this annual event. (10/20)

"Night Tide" (1963) A young Dennis Hopper is the chief attraction in this seldom-screened minor classic. Hopper is a sailor on leave who takes up with Linda Lawson, who plays a mermaid at the Santa Monica pier. Writer-director Curtis Harrington summons up a dreamy quality to allow us easier access to this charming fishy tale. Restored 35mm print.

"Carnival of Souls" (1962) Director Herk Harvey spins this tale about the spirit of a drowned woman. Made in Kansas by industrial filmmakers under the influence of avant-garde artists Ingmar Bergman and Jean Cocteau. (both 10/21)

"The Moth GrandSLAM" This event invites folks seeking to exercise their storytelling talents. (10/22)

"North by Northwest" (1959) Cary Grant was never funnier or sexier than in his final turn for Hitchcock. As Roger R. Thornhill, Grant is mistaken by some foreign dudes for a CIA undercover agent. From driving drunk in posh Great Neck, Long Island, to stowing away in Eva Marie Saint's compartment on the 20th Century Limited, to avoiding a killer cropduster, to racing across Lincoln's nose on Mount Rushmore, Grant performs with suave panache. Worth catching for Bernard Herrmann's score and great opening credits.

"Torn Curtain" (1966) Paul Newman poses as a scientist wanting to defect to East Germany in this minor Hitchcock Cold War thriller. (both 10/23)

"What Ever Happened to Baby Jane?" (1962) Robert Aldrich helmed this camp classic starring Joan Crawford as a crippled senior under the cruel custody of Baby Jane Hudson (Bette Davis). This clever farce inspired many a bad imitation. With Anna Lee, Victor Buono and Marjorie Bennet.

"Carrie" (1976) The dark side of high school was never better illustrated than this in collaboration between horror writer Stephen King and filmmaker Brian De Palma. (both 10/27)

"Frankenstein" (1931) Mary Shelley's novel is brought sublimely to the screen by gay director James Whale. One of the first cinema rushes of the fledgling Sound Era. With Boris Karloff, Colin Clive & Mae Clarke.

"Bride of Frankenstein" (1935) A rare example of a sequel surpassing the original. James Whale again helms, with Elsa Lancaster essaying twin roles as the monster's "bride" and, in a witty prologue, novelist Mary Shelley. (both 10/28)

"Marriage Story" (2019) Noah Baumbach directs Adam Driver & Scarlett Johansson as a couple splitting up and fighting their domestic civil war from New York to California and back. Driver is especially compelling as a man who experiences the breakup as both an emotional and a physical gut-punch. (SFFilm Special Screening, 10/29)

"Rosemary's Baby" (1968) Roman Polanski deftly presents a shockingly young Mia Farrow, just married to an ambitious actor (John Cassavetes) who starts to believe that satanic forces are after her first-born. Ruth Gordon got an Oscar as Rosemary's overattentive neighbor. Also with Ralph Bellamy.

"Invasion of the Body Snatchers" (1956) Don Siegel helmed this still-effective McCarthy-era version of a science fiction thriller, where "decent" citizens are replaced by zombie replicants. With Richard Carlson.