Bitter pills: 'The Ground Beneath My Feet' 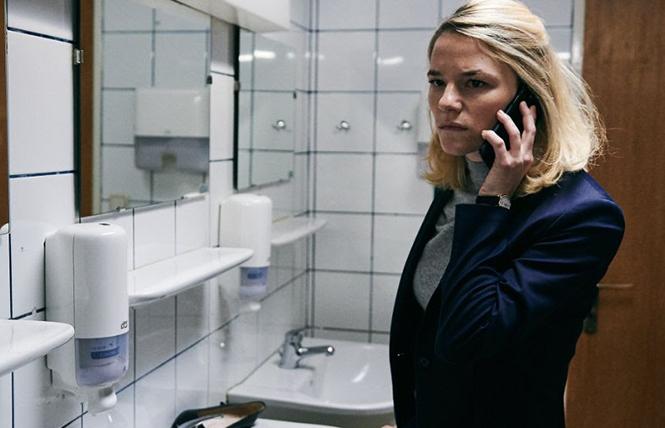 Valerie Pachner as Lola in director Marie Kreutzer's "The Ground Beneath My Feet." Photo: Strand Releasing

"The Ground Beneath My Feet" is a minutely observed drama about the downside of success in Austria. We see Lola, an uptight, closeted lesbian business consultant, as she pursues a way of life that seems destined to end in a nervous breakdown. Lola's job mirrors that of George Clooney in the 2009 dark comedy "Up in the Air," namely advising heartless companies, eager to fire as many long-term employees as possible, how to do the deed without being sued, very much the way you'd put an aging pet to sleep. While the Clooney film's brutal themes were laced with dark humor and romantic subplots, "Ground Beneath My Feet" resolutely delivers its bitter pills straight, no chaser.

Pills figure literally in the plot as Lola's whirlwind of flights and conferences is interrupted by a cry for help from her mentally ill older sister, Conny. Conny is recovering in a mental hospital after swallowing 120 sleeping pills. During a visitation, Conny reveals her fears that the medical staff is spying on her.

Lola: "Conny, you'll be better soon. We can talk on the phone."

"They'll listen in on us. You'll have to protect me."

"I'm trying to. Listen, the meds will stabilize you. I'll come again as soon as I can."

"You're lying to me. You told them to do this to me. You fucking whore!"

Drawing partly from her own life story, with a nod to Hitchcock's "Marnie," Austrian director Marie Kreutzer constructs a chilling vision about a society so obsessed with cost-cutting that it undermines goals of health care and family life. Shown at this year's Frameline fest, Kreutzer's film makes clear that the U.S. of Trump isn't the only society embarking on ruinous cutbacks in social services under the mantle of productivity.

Valerie Pachner as Lola delivers a mostly understated character who comes to see herself as desperately in need of a compassionate makeover. Lola is at one moment the ruthless costcutter, the next the acrobatic lover with her equally blonde boss, and still later the anxious sibling getting phone calls from the bed-ridden Conny. The filmmakers subtly present Lola's complicated relations with men, from courtly older executives to pushy power-brokers to flirty 20somethings whose naive innocence is but a momentary diversion from work-obsessed society.

This is sophisticated queer filmmaking whose concerns stretch beyond the ghetto or the boardroom, a Top Film candidate whose emotional currents will stay with you long after the screening. Warning: the ending is both shockingly brutal and brutally surprising. In German & English, with English subtitles. Opens Friday in SF & Berkeley.