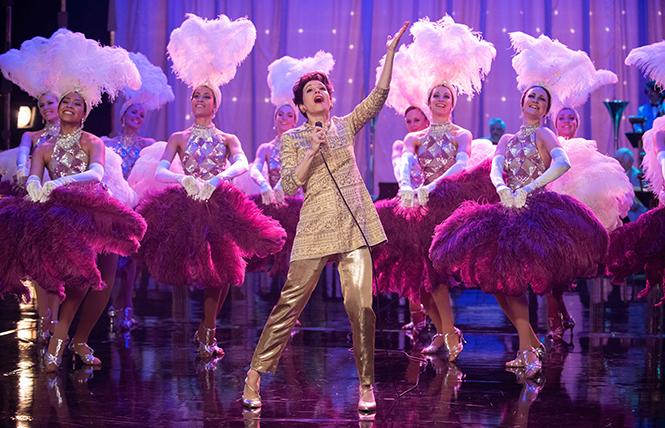 "You won't forget me, will you?" Judy asks the audience when she performs her last concert at Talk of the Town, a swanky nightclub in London. Within six months she died of an accidental drug overdose at 47. Fifty years later, she remains one of our best-remembered and most-beloved entertainers. A magnificent talent onstage and a troubled person offstage, Judy Garland became a gay icon when gay men of the pre-Stonewall era found solace in her music. One of the most moving scenes in "Judy," the new biopic now playing in theaters, finds Garland meeting two of her gay fans in London. She accepts an invitation to have dinner in their home, where they tell her how much her music has helped them deal with the pain of living in a world that doesn't accept them. The sequence is a magnificent nod to Garland's gay icon status.

Renee Zellweger, whose career had slowed down in recent years, makes a comeback as Garland. The actress looks like Garland. She gets the body language just right. But mostly, she captures Garland's tragedy. As "Judy" begins, it's the late 1960s. Garland finds herself homeless and broke. Sid Luft (Rufus Sewell), her most recent ex-husband, takes her children away from her. In a desperate move to make some money and regain control of her life, Garland accepts an invitation to perform a series of concerts in London. She also enters into a relationship with the much younger Mickey Deans (Finn Wittrock), who tries to give her career a boost. But Garland's unstable behavior squashes his efforts.

The film offers a few brief flashbacks into the life of the younger Garland (Darci Shaw) when she was a rising starlet at MGM. According to the film, Garland was manipulated by her mother and by studio boss Louis B. Mayer, neither of whom had the girl's best interests at heart. They gave Garland the first pills she would become dependent on, they planted the seeds for the unhappy woman she would grow up to be.

But "Judy" is Zellweger's show all the way. She beautifully captures Garland's heart and soul. She embodies the tragedy of a lonely woman who yearned for happiness and stability that always eluded her. "I want the same things everyone wants," Garland says. "I just seem to have a harder time getting it."

Zellweger does her own singing, and though she doesn't sound like Garland, she is still in fine voice and offers powerful takes on "Over the Rainbow," "The Trolley Song" and "Come Rain or Come Shine." Whether she's singing or not, Zellweger's performance is a showstopper from start to finish. In painting such an unforgettable portrait of one of the 20th century's greatest entertainers, Zellweger herself ascends to greatness. This is a performance that should be remembered come Oscar time.