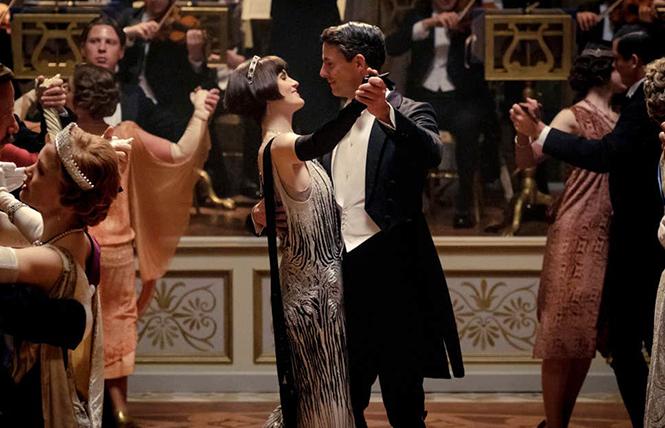 Michelle Dockery as Lady Mary Talbot (center left) and Matthew Goode as Henry Talbot in a scene from the film. Photo: AP

The magic of the big Castro Theatre screen becomes practically another character as "Downton Abbey," a BBC-TV import that ran for six hit seasons on PBS, makes the tricky transition to a stand-alone for a movie audience.

It's 1927, and at Downton Abbey, a centuries-old castle stuck in a rural slice of Yorkshire, members of the Crawley household prepare for the visit of King George V and his queen. Director Michael Engler (with screenwriter Julian Fellowes) smooths the way with a stellar Anglo-American cast, many of whom we have met in some notable American films. Elizabeth McGovern (Tim Hutton's high school girlfriend in Robert Redford's "Ordinary People"), Maggie Smith (the cranky chaperone in the enchanting Merchant-Ivory production of "Room with a View"), Imelda Staunton (the scene-stealing, penny-pinching Jewish mom in Ang Lee's witty backstory comedy "Taking Woodstock") and Hugh Bonneville ("Notting Hill") combine to allow us to experience the magnificent absurdity of a way of life that was quickly becoming a museum piece.

"Downton Abbey" the TV series opened in 1912, the year the Titanic sank, an especially anxious time when Britain was preparing for the "Great War," the conflict that bankrupted the nation, leading to the loss of empire. Screenwriter Fellowes creates in "Downton Abbey" a very human symbol of all that had been and would soon no longer be. The series and the film (running through at least Oct. 3 at the Castro) allow us to be flies on some very old walls as lords and ladies, servants and kitchen staff bicker and tussle for position in whatever the new post war pecking order will be. Maggie Smith brings a world-weary and witty wisdom to an old duchess who's so out of touch that she fails to understand what her younger sophisticated kinfolk mean when they chat about coming up to Downton Abbey for "the weekend."

Queer fans of the series will especially delight in a moment when two young men meet at the Abbey, then depart to wicked London, where they gain entrance to a very hush-hush gay club where men from different backgrounds dance, kiss and feel each other up, only to be rudely interrupted by a brutish police raid where they are hauled off to jail and an Oscar Wilde-style night of shame and humiliation.

At the heart of the "Downton Abbey" film is a bitter struggle between the servants and the large entourage that follows in the wake of a royal visit. At one point, the woman in charge of the Abbey's staff dukes it out with a nasty official who orders them to stay out of the way as he and a haughty French chef prepare the grand meal.

"So my maids and I will not be involved in the preparations. You will be the butler?"

"Excuse me, I'm not a butler, I'm the King's Page of the Backstairs."

Spoiler alert: This time the "good guys" win, and Downton Abbey welcomes the king on its own terms. In many ways, "Downton Abbey" is a lavishly mounted, hilarious missing link between films set pre-WWI inspired by E.M. Forster's novels ("Room with a View") and "The King's Speech," where George V's stuttering heir would have to speak for a nation under both verbal and physical assault from the Nazis.