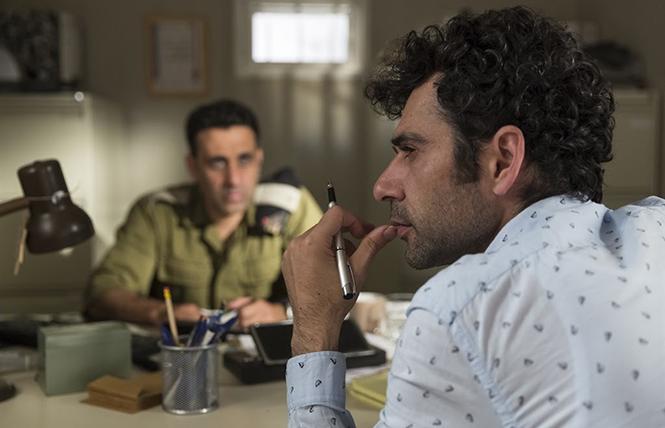 Israeli filmmaker Sameh Zoabi's screwball-style romantic comedy "Tel Aviv on Fire" opens Friday. In it, Salam, a shaggy-haired Palestinian TV writer, stumbles into an odd but rewarding collaboration when he's pulled over at an Israeli Defense Forces (IDF) checkpoint. The Israeli officer in charge, General Assi, gives the nebbish-like Salam a hard time until he discovers the young man is writing for a wildly popular Palestinian TV soap opera, "Tel Aviv on Fire."

The general doesn't realize that Salam is a newbie writer, just promoted from prop assistant in the Ramallah production company owned by his nervous Uncle Bassam. "Tel Aviv on Fire" (the soap) flashes back to the 1967 Arab-Israeli War, the conflict that led to the present-day situation where the IDF controls the Palestinian West Bank, subjecting its Arab population to humiliating daily border interrogations.

Palestinian Salam, a clumsy apprentice adult who early in the film comes off like a goofy Kramer type from TV's "Seinfeld," starts to come into focus as he tussles with the Israeli officer Assi for control of their joint artistic project. The film overflows with a quirky supporting ensemble, from screenwriters who need to be eating while they work to a gaggle of older Palestinians who can't shake the bad vibes from their battlefield debacle. It's enough to distract us from the harsh reality that ancient rivals are still quarreling over a slice of real estate about the size of New Jersey. Lubna Azabai is sublime as Tala, who in the show-within-the-film plays a fictional Palestinian spy during the 1967 war.

While you may need a scorecard or at the least a copy of the 2019 SF Jewish Film Festival program, where it received its Bay Area premiere, to unravel all the plot-lines and twists, remember that this is a smart political satire from a very tough neighborhood, where laughs are often hard to come by. Winner of a Best Actor award at the Venice Film Festival, "Tel Aviv on Fire" is in Hebrew with English subtitles, with a running time of 97 minutes.