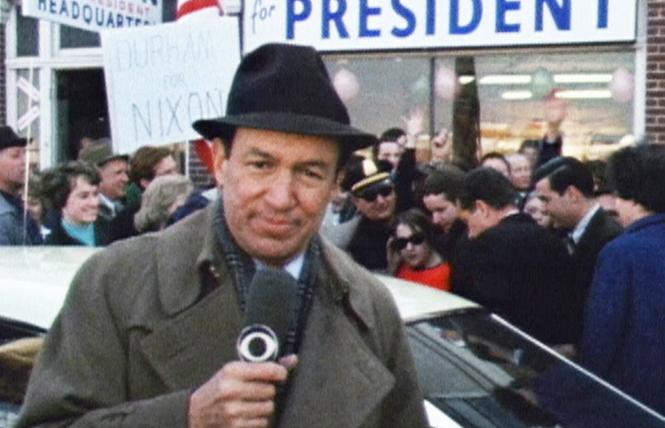 The provocative new bio-doc "Mike Wallace is Here" (opening Friday) is an instructive guide to a chaotic universe. At 38, Israeli-born filmmaker Avi Belkin was too young to have caught the Brookline, MA-born Wallace (1918-2012) as he switched careers from melodramatic movie actor to tabloid TV chat-host (1950s "Night Beat") to pitchman for dubious kitchen products ("Fluffo"), ultimately to an early version of "the loudest voice in the room." Wallace and CBS producer Don Hewitt invented a flashier, short-attention-span version of CBS' style of covering the world of the bomb, the pill and the youth movement, the now-half-century-old "60 Minutes."

A cautionary note: While "Mike Wallace is Here" is a useful guide to the media-saturated world, the film doesn't quite cover the waterfront. CBS News, "60 Minutes" and Wallace have a mixed record in covering issues reflecting the LGBTQ community. In 1980, "CBS Reports: Gay Power, Gay Politics" devoted a full hour to what the doc team (narrated by Harry Reasoner) felt was a growing threat posed to mainstream community values by the growing visibility of a male homosexual presence in major American cities, especially San Francisco. The focus of the program was how a charismatic street leader (24-year-old Cleve Jones) and a savvy would-be successor to the late Harvey Milk, real estate broker David Scott, emerged as gay power-brokers convincing mayoral candidate Dianne Feinstein to disavow moral criticism she had made of gay men in The Ladies Home Journal. 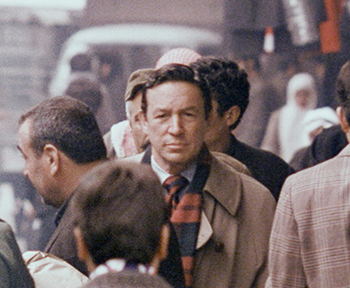 In 1967, a short CBS News segment narrated by Wallace focused on the "threats" gay men represented to young children. The broadcast did present a strong rebuttal to those views from openly gay novelist Gore Vidal, who pointed out that the traditional concept of a closed marriage was becoming obsolete even among heterosexuals.

While the film fails to address its subject's reporting on LGBTQ issues, the piece does cover a huge swath of the life and work of a man who lived to be 93, and didn't retire until age 88. One of the most entertaining reveals finds Wallace chatting with a young Donald Trump, in his late 30s and sans the cartoon hair, who explicitly denies political ambitions.

The film shows how Wallace and the turmoil of 1968 (assassinations of Dr. Martin Luther King, Jr. and Robert Kennedy) inspired the creation of "60 Minutes," which would go on to perform investigative surgery on President Richard M. Nixon and the men of the Watergate scandal. It also humanizes its subject with a sequence where he discovers the body of his youngest son, Peter. The young man had fallen off a cliff while on a rugged wilderness adventure. Wallace confesses to fellow "60 Minutes" reporter Morley Safer that he had been a neglectful father.

There's irony in the saga of the man born Myron Leon Wallace. Myron developed a severe case of acne, and for many years the ambitious young man felt his was a face fit only for radio. We see snapshots of his relationships with women, from former movie star Bette Davis in her 80s, who has her share of surly regrets, to a combative Barbara Streisand ("Mike, you're a son-of-a-bitch"). Wallace eventually mellows into a genial colleague of "60 Minutes"' longest-running female correspondent, Lesley Stahl. This "life of Myron" reveals him to have been an emotionally complicated man who at times suffered from crippling depression that led him to the brink of suicide. Wallace later made a widely-seen PSA urging viewers to seek professional help for mental health issues.

Another reliable guide to this era is "Cronkite," a biography of the veteran CBS anchorman by Douglas Brinkley (paper, Harper Perennial). Brinkley documents Cronkite's adoption of gay rights as his own personal crusade after his newscast was "zapped" by Mark Segal of the Gay Raiders."