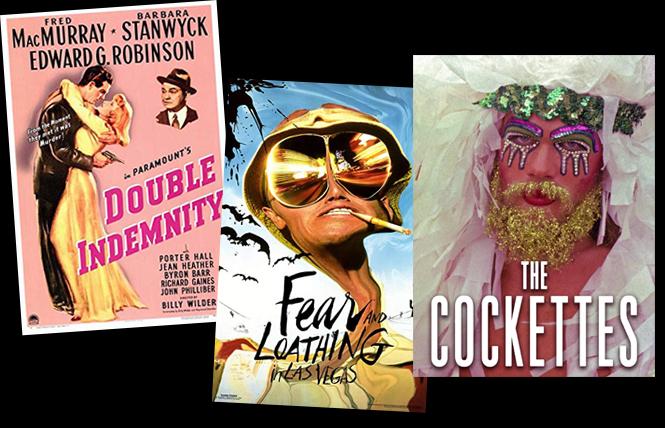 Recovering from its extraordinary role during Pride Month, the Castro Theatre dives back into classical noir to offer nine days of double features wrapped around the 2019 San Francisco Jewish Film Festival.

"Double Indemnity" (1944) The film that forever altered nice guy Fred MacMurray's clean-cut image: Fred is a cynical but hard-working insurance salesman who's talked by a tough blonde (hot but devious Barbara Stanwyck) into the murder of her grumpy and over-insured hubby. Adapted by director Billy Wilder and tough-guy writer Raymond Chandler from James M. Cain's short novel, many claim this wicked classic marks the birth of an American film noir movement that's still alive and kicking.

"There's Always Tomorrow" (1956) In this neglected Douglas Sirk gem, MacMurray is a frazzled toy company owner who seeks playtime relief from a comatose marriage (to Joan Bennett). The temptress is again a pitch-perfect Stanwyck, in a film that's ahead of its time about the dangers of marital bliss. (both 7/11)

"The Doors: The Final Cut" (1991) Nearly three decades after the debut of this over-the-top, Oliver Stone-directed tribute to the excesses of sex, drugs and rock-n-roll, the tragic rise and fall of The Doors' lead singer Jim Morrison (sublime Val Kilmer) seems perfectly in sync with our decadent times. Stone, a filmmaker whose best work ("Salvador") is diabolically accurate about America's colonial wars, here shows that the sins of The Doors were as much inspired by government persecution as by any flaw in Morrison's character. Featuring over two dozen musical cuts and a terrific supporting cast: Meg Ryan, Kyle MacLachlan, Kevin Dillon, Frank Whaley, Billy Idol and Kathleen Quinlan.

"Fear and Loathing in Las Vegas" (1998) Fans of Hunter S. Thompson's Rolling Stone magazine character will appreciate that this drug-fueled voyage violates the maxim that "what happens in Vegas stays in Vegas." With Johnny Depp as Thompson alter ego Raoul Duke and Benicio Del Toro as his crazed assistant Dr. Gonzo, and look for a sweet-mannered Tobey Maguire as a naive kid thumbing a ride. Plus an amazing ensemble anxious to play for director Terry Gilliam. (both 7/12)

"Long Day's Journey Into Night" (2019) Chinese filmmaker Bi Gan's road drama about a man searching rural China for a woman from his past.

"The Cockettes" (2002) David Weissman & Bill Weber brilliantly recall the heady days of the early 70s when a crazed band of druggies were SF counterculture sensations. Later the same troupe bombed in Gotham. (both 7/16-17)

"Halston" (2019) Gay fashion designer Halston gets a long overdue bio-pic. A product of very white and very straight Midwest suburbia, Halston would ignite the world of women's fashion. His own words give a sense of what gave him the most pleasure in life. Oscar night, 1975: "This is glamor! The stars, the palm trees, the weather, the glitter. I came with a dream of what the Academy Awards were like, and I'm going home with a full stomach."

"Nureyev" (2018) Directors Jacqui and David Morris offer a nuanced and moving portrait of openly gay Russian dance star Rudolf Nureyev, which dramatically soars in its depiction of his defection to the West. (both 7/30-31)