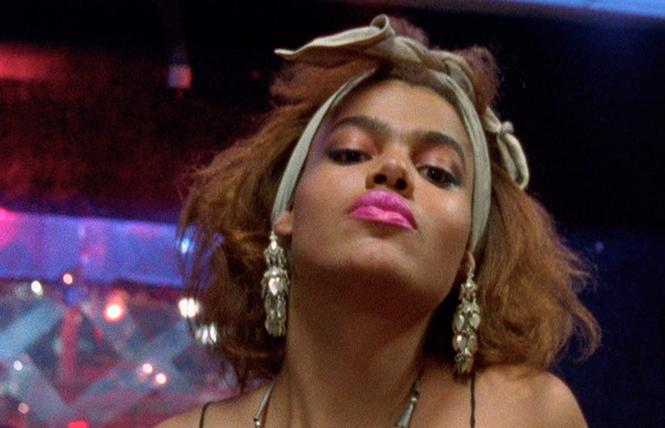 First released at the height of the AIDS health crisis, "Paris Is Burning" is a 1990 feature-length documentary in which director Jennie Livingston embeds us with a subversive and feverishly nimble community of gay and trans, white, black and brown kids. In the upper precincts of mid-80s Manhattan, they invented a style of dancing, "vogueing," layered, intricate and private. "Paris Is Burning" wowed a mainstream audience with a thrilling backstage view of young Latinx and African Americans staging their own fantastic drag balls. Now it's back in re-released restoration.

Livingston allows her young subjects to describe the stakes involved in these offbeat competitions that derive their name from Vogue, the grandmother of high fashion magazines. As the young dancer Dorian Corey puts it, "I always had hopes of being a big star. But as you get older, you aim a little lower. Everybody wants to make an impression, some mark upon the world. Then you think you've made a mark on the world if you just get through it and a few people remember your name. You don't have to bend the whole world. It's better to pay your dues and just enjoy it. If you shoot an arrow and it goes real high, hooray for you!"

Young Pepper LaBeija deftly unspools the sociology contained in this singular event. "This is white America. Any other nationality that is not of the white set knows this and accepts this til the day they die. That is everybody's dream and ambition as a minority: to live and look as well as a white person. Every media you have, from TV to magazines, to movies, I mean, the biggest thing that a minority watches is what? 'Dynasty' and 'All My Children,' the soap operas.

"Whether they're showing you a commercial from Honey Grahams, Crest, Lestoil or Pine-Sol, everybody's in their own home. The little kids for Fisher-Price toys: they're not in no concrete playground. They're riding around the lawn. The pool is in the back. This is white America. When it comes to the minorities, especially black, we have had everything taken away from us, yet we have all learned how to survive. That is why, in the ballroom circuit, if you have captured the great white way of living, or looking, or dressing, or speaking, you is a marvel!"

"Paris Is Burning" is a scintillating example of how art can serve life without compromising its objective of adding meaning to our journey. A half-century into the era of gay liberation, queer self-expression and increased visibility for all sexual minorities, "Paris Is Burning" can be seen as a pioneering work of art. It adds to our knowledge of how oppressed people can evolve and thrive, but not without real pain and damage. One of the film's subjects was later found murdered, a case that remains unsolved.

At the time of its initial release, director Livingston was criticized in some quarters as a white filmmaker appropriating a minority artform. Now in this re-release, the film is clearly a precious record of the artistic vitality of a truly gifted gaggle of LGBTQ kids. Livingston spent seven years filming, editing (78 minutes derived from over 700 hours of footage) and fundraising, at a time when government support for LGBTQ arts projects was coming under withering attack. She later confided her ambition for "Paris Is Burning": "This is a film that's important for anyone to see, whether they're gay or not. It's about how we're all influenced by the media, how we strive to meet the demands of the media by trying to look like Vogue models or by owning a big car. And it's about survival. It's about people who have a lot of prejudices against them, and who have learned to survive with wit, dignity and energy."