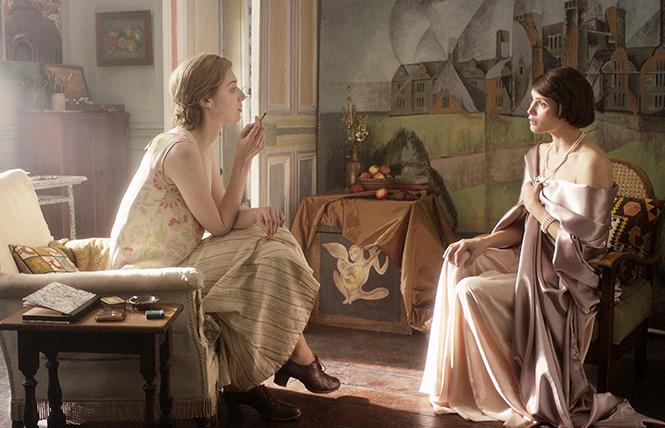 Frameline 43, the 2019 San Francisco International LGBTQ+ Film Festival, opened last Thursday night at ye olde Castro Theatre with director Chanya Button's "Vita & Virginia," the juicy story of the lesbian love affair between authors Virginia Woolf (Elizabeth Debicki) and Vita Sackville-West (Gemma Arterton). The house was packed for a period lesbian bio-pic, that itself was an achievement. Plus, the film was really good, with Debicki especially giving a layered, riveting performance as Woolf. Isabella Rossellini, as Vita's disapproving mother, stole each short scene she was in. The afterparty at Terra Gallery was festive and fun.

Out There's very full week began with a night at the opera, George Frideric Handel's "Orlando" at San Francisco Opera, with our old pal Marc Huestis. We were celebrating the publication date for his new memoir "Impresario of Castro Street" with some good old-fashioned operatic spectacle, followed by voluminous martinis at Martuni's. Congrats, marvy Marc!

The next night found OT back in the Opera House — we just can't quit you, press concierge Bill Repp! — this time for a knockout performance of SF Opera's take on Antonin Dvorak's "Rusalka." The production is a huge success with critics and audiences, and the ovations at opera's end were thunderous. It also happened to be SF Opera's "Pride Night," with DJ music and drinks in the loggia, and rainbow flags waving from the stage at curtain call.

Friday night we escaped from our responsibilities for this year's Pride issue by escorting the gentile gentleman Pepi to this year's Mark Rhoades-produced Pride Party, always one of the most festive affairs of faerie week, this time transpiring at the AT&T superstore on Hallidie Plaza, high faggotry right in the belly of the capitalist beast. Many handsome revelers and power-perked politicos were in attendance, Rhoades was in his element, and dragster Jinkx Monsoon provided bent-ertainment.

Saturday night we were in the house for the opening of the 2019 Art + Pride Exhibit at Harvey Milk Photo Center, the work of many local queer photographers, including John Higgins, Jim James and Rink Foto. Sunday night we were pooped, and we still had another week to go until Big Gay Pride Christmas-&-Chanukah Day! Next week we'll tell you how that all worked out. Meantime, glitter and be gay!