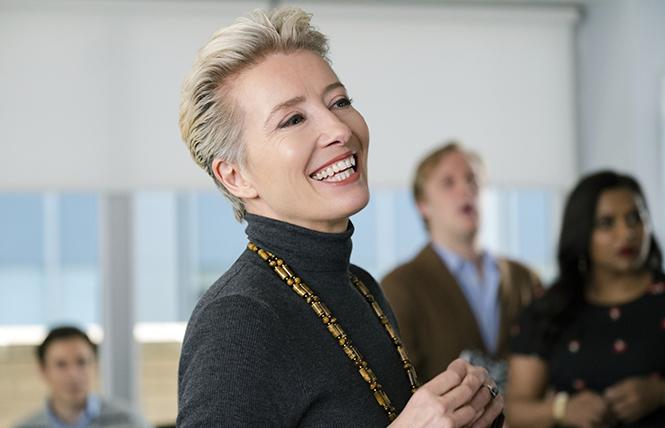 "Late Night," an acerbic female buddy film opening Friday, takes us inside the cutthroat world of Midnight TV chat shows with the premise that one of them is hosted by a woman; none currently is.

Most of us are familiar with the ruthless machinations behind the scenes of talk shows, due to how often these situations are regurgitated on sitcoms and in standup monologues. The female "monster" at the center of "Late Night" is veteran British film star Emma Thompson, here playing Katherine Newbury, a haughty 56-year-old late-night TV hostess who, improbably, has never even met her all-male writing staff. Newbury also has a well-deserved reputation for providing a cold shoulder to younger women seeking a door into the business.

So it's a little hard to accept that this ice queen would add a young woman of South Asian heritage with no experience writing comedy to her writing staff. That woman is played with more chutzpah than aplomb by the film's screenwriter, Mindy Kaling. Kaling's Molly is faced with a problem that would defy the skills of the cagiest of industry hands: how to cultivate an audience for an arrogant fading star whose low ratings appear just reward for bad material and a charmless public persona. "Late Night" sets about demonstrating why, despite the existence of more than a half-dozen late-night talkfests, not one is hosted by a woman. The late comic Joan Rivers is one of the few women to have (temporarily) broken into the late-night boys' club. Rivers' stint as Johnny Carson's most frequent "Tonight Show" substitute ended when Johnny took offence at Rivers' acceptance of a hosting job for the rival Fox network.

The men in the cast (mostly fleshing out the writers' room) are a drab lot, with the exception of John Lithgow as Newbury's physically disabled husband, whose scenes with Thompson are the sole indication that Newbury has a vulnerable side that could come across as human, let alone funny, to a hip late-night audience. Thompson and Kaling do have a warm moment late in the film, when the star has to ascend six flights of stairs to her assistant's Brooklyn tenement apartment.