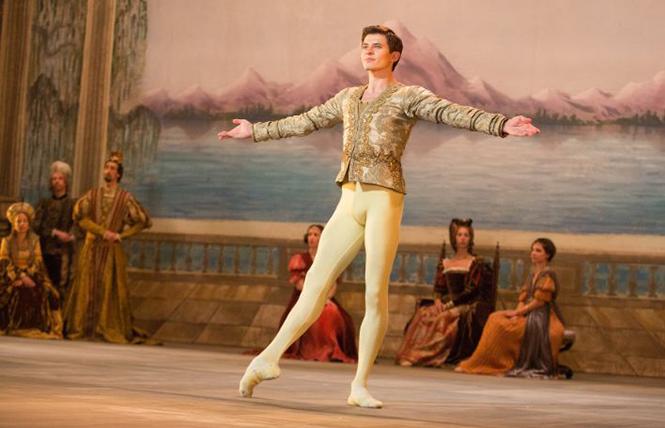 "The White Crow," now playing at Bay Area Landmark cinemas, is a beautifully mounted biography of a fascinating figure in the dance world. Decades after his death from complications related to AIDS, Rudolf Nureyev (1938-93) continues to stir hearts with his athletic ballet performances, but also with his controversial personal life: a gay man performing in a Soviet police state where many were exiled to the frozen tundra for less provocative behavior.

Director Ralph Fiennes, working from a screenplay by award-winning playwright David Hare, focuses his Nureyev tale on the dancer's headline-grabbing defection to the West after Soviet authorities threatened to punish him for consorting with Western intellectuals. The film's climatic scenes, depicting Nureyev's dramatic defection in Paris, are deeply moving and will land the movie a spot on many 2019 Best Picture lists. For LGBTQ audiences, "The White Crow" (Russian slang for a nonconformist) presents challenges. The film has already stirred up a fuss on IMDB for supposedly "straight-washing" the life of this ultimate queer rebel. It's a problem I believe offset by a marvelous performance from newcomer Oleg Ivenko as the moody 24-year-old ballet divo approaching the peak of his artistic powers.

The film fully resonates in a harrowing third act where Nureyev has to plead with French authorities at the Paris airport to prevent a Russian security force from abducting him back to the Soviet Union, to a most uncertain fate. Rated R for sexuality, graphic nudity & language. Shot in Russia, Serbia, Germany & France, in Russian, French & English, with English subtitles.