Dr. Ruth wants you to have good sex 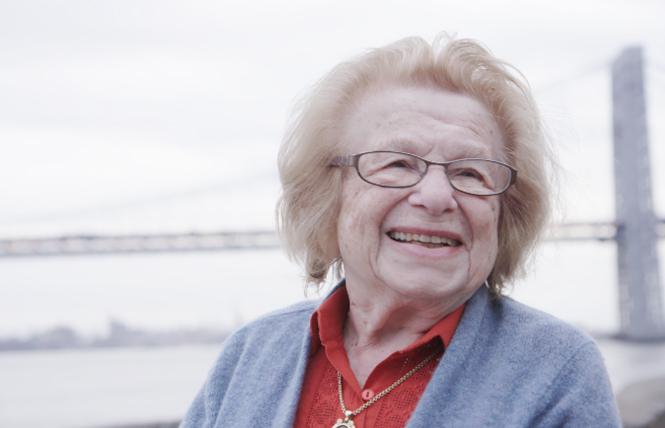 There are just a few things that Dr. Ruth won't say. In "Ask Dr. Ruth," a delightful new documentary from filmmaker Ryan White, the good doctor assures the camera that no one will ever know who she's sleeping with or how much money she has. Beyond that, you can expect just about anything from Dr. Ruth.

"You should insert the penis into the vagina from behind," she says matter-of-factly on one of her television appearances. Her bluntness makes some audience members giggle. Talk show host Arsenio Hall blushes as he's prodded by the doctor to say "vagina" on the air. One man is so shocked by Dr. Ruth's frankness that he tries to put her under citizen's arrest.

But most people adore the cute, folksy grandmotherly type with the thick German accent. She makes it OK to talk about forbidden topics. She doesn't judge. And the advice she gives is sound.

"Don't worry about her past," she says to one young man who's concerned that his girlfriend has had too many bad relationships before she got together with him.

You can say anything to Dr. Ruth. One young man bemoans the size of his 14-inch penis, which he says frightens the women he dates.

"Ask Dr. Ruth" tells the whole story of this unusual woman's life. Born Karola Ruth Siegel to Orthodox Jewish parents in 1928, the film recalls what began as an idyllic childhood in Frankfurt, Germany. But young Ruth's innocence was shattered when the Nazis forcefully took her father to a labor camp. Ruth's mother and grandmother sent her to an orphanage in Switzerland where she was able to escape the horrors of the Holocaust. She never saw her family again. In one of the film's most moving sequences, Ruth visits Yad Vashem, the world Holocaust memorial center in Jerusalem, where computer files verify what she already knew: that her entire family was murdered by the Nazis.

As someone who understands all-too-well the harm that hatred and bigotry can do, Ruth becomes a champion for people who are viewed as "subhuman." Her rise to fame in the 1980s, which began with a Midnight radio show called "Sexually Speaking," coincided with the onset of the AIDS epidemic, which hit the gay community especially hard. Ruth finds herself answering a question from a young man whose girlfriend has a lot of gay friends. He's afraid that she'll pick up the disease from them and pass it along to him. Holocaust survivor Ruth refuses to stigmatize anyone.

"I don't waste my time blaming people," she says.

For all her celebrity, Dr. Ruth is a simple woman. She still lives in the same cluttered, two-bedroom apartment in New York City that she's called home for 54 years, where she lived with her husband of nearly 40 years and raised her children. It's a comfortable apartment, filled with mementos of a life well-lived. Though her husband has since passed on, she maintains a close relationship with her children and grandchildren.

"He would love to have seen his grandchildren grow up," she says of her husband, one of the few times she lets her private emotions show.

Now 90 years old, Dr. Ruth has yet to slow down. She continues to make television appearances, write books, teach college courses, and speak frankly about everyone's favorite topic, sex. You can still ask Dr. Ruth anything about sex, and she'll cheerfully give you a no-holds-barred answer.

As a film, "Ask Dr. Ruth" is a delight. It's a peek inside the mind and psyche of a remarkable woman who's had a memorable impact on society. There's never been anyone quite like Dr. Ruth. It's highly unlikely we'll see anyone like her again.

Opens on May 3 at Landmark's Clay Cinema in San Francisco and Landmark's Shattuck Cinemas in Berkeley. https://www.landmarktheatres.com/san-francisco/clay-theatre/film-info/ask-dr-ruth