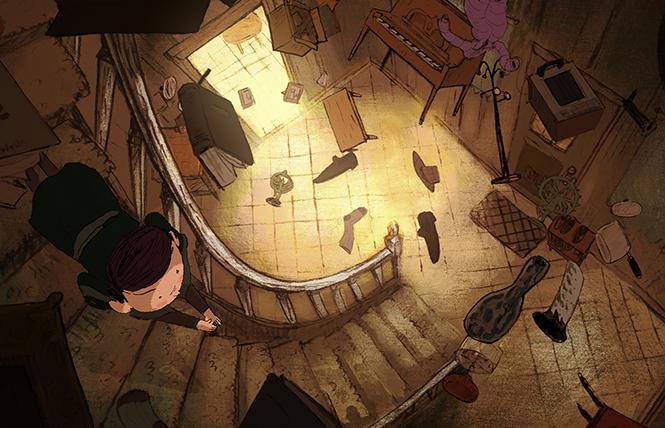 Written and directed by Trevor Jimenez, the animated short "Weekends" is nominated for an Oscar. Photo: Courtesy the filmmaker

Out There goes out & about to arts & cultural events five nights out of seven most weeks. It's a good way to stay involved, be a part of the city, see different neighborhoods and get out of our own personal bubble. Just look at everything we got to experience last week!

Last Wednesday night we went to see the Oscar-nominated Animated Shorts program at the Embarcadero Cinemas. The New York Times published a plea last weekend for the Academy to drop its three short-film categories from the Oscar telecast, but we think this is wrong-headed. The Shorts programs (animated, live action and documentary) are now routinely screened in commercial theaters in the weeks prior to the Oscar broadcast, and they're a good way to sample the work of diverse and international filmmakers. Anyway, the animated shorts are always fun to see. This year the nominees are:

"Animal Behaviour" (National Film Board of Canada), directed by David Fine & Alison Snowden. Five animals meet regularly to battle their compulsive behaviors in a group therapy session led by Dr. Clement, a canine psychotherapist with compulsions of his own (butt-sniffing). "The group includes Lorraine, a leech who suffers from separation anxiety; Cheryl, a praying mantis who can't seem to keep a man; Todd, a pig with an eating disorder; Jeffrey, a bird with guilt issues; and Linda, an obsessive-compulsive cat. But this week's session proves to be a challenge for the group when they're joined by a reluctant new member: Victor, an ape with anger-management issues." Haven't we all been there? High-larious!

"Bao" (Pixar Animation Studios), directed by Domee Shi and Becky Neimann-Cobb. An aging Chinese mother gets a big surprise when one of her handmade dumplings springs to life. This will probably win the prize, as it's from the Disney-Pixar powerhouse studio, but we found it cloying and sentimental.

"Late Afternoon" (Cartoon Saloon), directed by Louise Bagnall and Nuria Gonzalez Blanco, is a touching study of an older woman remembering major life events as she drifts off into dementia.

But Out There's choice for the Oscar for Best Animated Short is "Weekends" (Past Lives Productions), directed by Trevor Jimenez. A boy is shuttled back and forth between very different and divorced parents. A simple premise, but one told with thoughtfulness and precision. Hand-animated, set in 1980s Toronto. 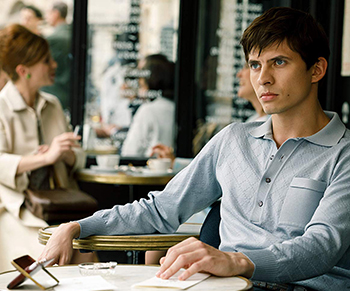 Then, Thursday night, OT attended the opening of the Mostly British Film Festival, which got off with a bang at the historic Vogue Theatre with the California premiere of "The White Crow," directed by and starring Ralph Fiennes. The film follows Russian ballet legend Rudolf Nureyev from his humble beginnings to his dramatic defection to the West in 1961. With a script by British screenwriter-playwright David Hare, the dance-heavy biopic stars yummy acclaimed Ukrainian dancer Oleg Ivenko as Nureyev. And although the main romance depicted is boy-girl, the movie clearly makes the case that Rudy went for more than a little boy-boy action as well. But oh, those mean old Russians were always trying to step on his fun!

In the moviehouse and sitting just two rows in front of OT were San Francisco film-world first couple Francis Ford and Eleanor Coppola, escorting their friend, Tosca owner Jeanette Etheridge, who gave a talk after the screening about her friendship with Nureyev, and his famous arrest in 1960s SF for smoking pot on a Haight-Ashbury rooftop. The film festival's kickoff party filled the Laureate Bar & Lounge in Laurel Heights with fans of quality motion pictures.

All of the ballet imagery and intrigue in "White Crow" made for a good warm-up for our next two evenings out, Friday & Saturday, which were both at the Opera House to see San Francisco Ballet in this season's Programs 2 & 3. You can find dance writer Paul Parish's review of both programs in this issue; OT was happy just to bask in the music, the lithesome bodies of the dancers, and the sheer beauty and spectacle of the performance.

Friday night was the first of the season's Nite Out series, which turned out to transpire in Dress Circle after the show, not in the basement bar as foretold. On each of this series' three nights, the ballet company honors another community nonprofit organization. Last week, the honoree was The Transgender Law Center. These post-performance parties are a good way to connect with fellow audience members and ballet enthusiasts over a drink; a poster announced that the events celebrate the diverse LGBTQQIA community in San Francisco — and the company has added letters to that pile of initials since last season. We take the double-Q to represent both Queer and Questioning. But really, shouldn't the Questioning contingent be Answering by now?