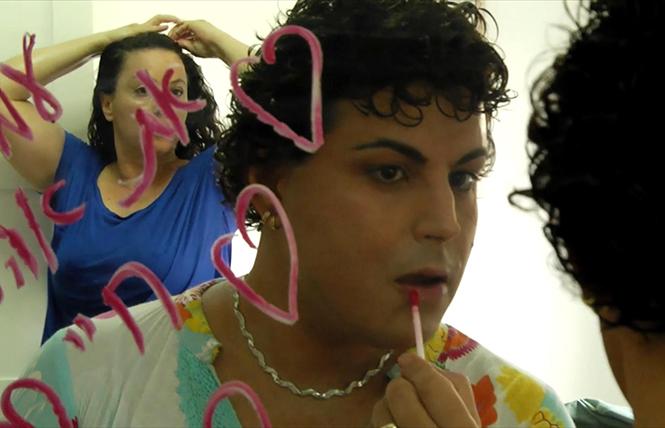 An Israeli documentary about a transgender woman and her relationship with her family is among the highlights of the 6th Annual WinterFest, the Jewish Film Institute's special presentation of new Jewish cinema at the Alamo Drafthouse New Mission and Roxie Cinema on Feb. 16 & 17.

Offir Trainin's "Family in Transition" is a 70-minute documentary in which Amit, a happily married husband and father, tells her wife that she's actually a woman. The couple lives in the small seaside Israeli town of Nahariya, where the majority of the population is religious. In this intolerant environment where it's not unusual to hear taunts of "faggots/dykes" on the street, Amit's wife Galit decides to stay with her.

"After I have the operation I'll be much more at peace with myself," Amit says.

The film follows the couple's journey and the journeys of their children as Amit goes through her transformation and settles into her new normal. As the family defies the conventions of their conservative town, Amit tells Galit that she wants them to get married as two women.

"Family in Transition" will open hearts and minds. It's the tale of a family that breaks social conventions, that changes what we thought we knew about gender, parenthood and being transgender. It's about a family that redefines the limits of recognition, acceptance and love of those closest to us. The film screens on Feb. 17, 2 p.m. at the Roxie.

Another highlight of WinterFest is "Carl Laemmle," James Freedman's 90-minute documentary about the life and career of the founder of Universal Studios. Using archival photographs, film clips from movies and interviews with several of Laemmle's descendants, "Carl Laemmle" traces Laemmle's life from small-town Germany to the United States, where he emigrated as a young man. The film recounts his entry into the movie business as a small theater owner, his first forays into production, and his legal battles with Thomas A. Edison when Edison attempted to monopolize the burgeoning film industry.

The film recalls Laemmle's purchase of a chicken ranch in Southern California, which eventually became the backlot for Universal Studios. Laemmle is remembered as a visionary who hired women directors and who was unafraid to tackle the major social issues of the day. His film "All Quiet on the Western Front," winner of the Best Picture Oscar in 1930, remains one of the most powerful anti-war statements ever put on film.

Laemmle and his son, Carl Laemmle Jr., are also remembered for the films that cemented Universal's reputation in the hearts of horror lovers. It was Universal that produced the original "Dracula" and "Frankenstein" in 1931, as well as many other classic monster films. These highly expressionistic and stylized creations were years ahead of their time, many still considered to be among the greatest films ever made.

Most movingly, "Carl Laemmle" follows Laemmle during the years after he lost control of Universal. As Hitler and the Nazi Party were rising to power in Nazi Germany, Laemmle, who was Jewish, used his own money and influence to obtain American visas for more than 300 German Jews, saving them from certain death in the Nazi concentration camps.

"Carl Laemmle" is a riveting, fast-paced film that pays a long-overdue tribute to one of the cinema's more courageous risk-takers, a man who was also a great humanitarian and a hero of the Holocaust era. Screens at 12 Noon at the Roxie on Feb. 17.

Other highlights of Winterfest include "Joseph Pulitzer: Voice of the People," a film that takes on a special meaning in this era of "fake news." Pulitzer spoke of fake news over 100 years ago, fighting against the suppression of news long before our present threats to freedom of the press. The film screens Feb. 16 at 12 Noon at Alamo Drafthouse.

"Home Page" is a 1999 documentary being screened for its 20th anniversary. It's the story of pioneering personal blogger Justin Hall set during the early years of the internet. Hall and director Douglas Block will appear in person at the screening. The film screens Feb. 17 at 8 p.m. at the Roxie.

For the complete schedule to Winterfest, and ticket information, please visit: https://jfi.org/year-round/winterfest-2019