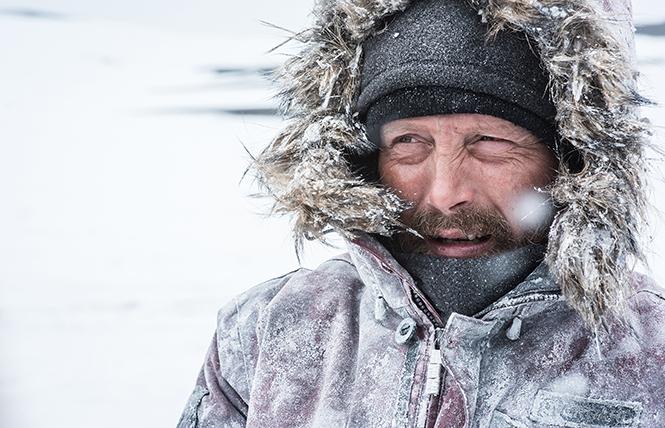 A moving tale of survival against all odds, "Arctic" is a crazy-quilt mix of elements. It has a Danish film star, a Brazilian-born director, more snow on screen than any movie since the 1922 Eskimo doc "Nanook of the North," a sleeping beauty of a female co-star, a spectacular plane crash, and when you least expect it, a touch of the savage in the form of a huge, snarling polar bear. Its plot is simple. A man (Mads Mikkelsen), lost in the Arctic after surviving a plane crash, must choose between staying in the safety of the shelter he's crafted out of the wreckage or setting out for civilization by walking across the frozen tundra.

Director Joe Penna puts Mikkelsen, one of Denmark's most bankable film stars, in a predicament where he has to wait half the movie to save a damsel in distress (Maria Thelma Smáradóttir), survivor of a helicopter accident who spends most of her screentime unconscious. "Arctic" is a perfect treat for silent-film fans: Mikkelsen has only a couple of lines, muttered to himself, whispered to the girl, or shouted at the startled bear. What gives the movie an appeal beyond The Weather Channel is the plight of a middle-aged man testing his mettle against the worst that nature can throw against him. (Opens Friday.)

"Cold Pursuit" In a cinema trick straight out of the Stanley Kubrick playbook, a snowplow operator and his powerful machine become vehicles of rage and revenge in an edgy new action thriller. This enthralling remake of the 2014 Norwegian snowbound adventure "In Order of Disappearance" stars an implacable Liam Neeson. The burly Irish-born actor first came to the attention of American filmgoers in the 1992 Woody Allen marriage-implosion classic "Husbands and Wives." In recent years Neeson has specialized in "thinking man" crime dramas where a man better be a man.

In "Cold Pursuit" Neeson is a contented working-stiff with a wife (Laura Dern) and an angelic teenage son. When the son is found brutally murdered in a snow bank, the apparently innocent victim of a ruthless drug gang, Neeson's primal urges are ignited and we're off to the races, with a growing body count in a dark-comedy gore fest that resembles a smart sendup of the HBO series "Six Feet Under."

Filmed around Vancouver, BC, by the original Norwegian director Hans Petter Moland, the film has grisly fun with the traditional crime-mob biz of contract murder and body removal, mixed with a savage take on Native American burial rituals. "Cold Pursuit" is unrelenting in its determination to leave only one man and one kid standing. It's an excellent Oscar-season intermission that should play splendidly on cable, streaming, DVD and Blu-Ray. (Opens Friday.)