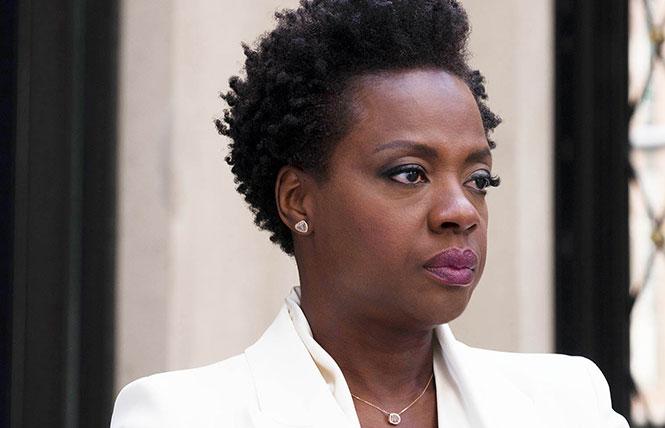 With "Widows," Afro-British director Steve McQueen completes the fourth in his quartet of films on topics that have shaped our modern world. The film shows four women, led by Viola Davis, struggling to repay a staggering debt their husbands incurred with the Chicago crime mob.

"Widows" delivers a huge cast in service of a female-centered crime thriller. Four women who are not initially acquainted share a common misfortune: they're all survivors of marriages where the men died leaving large debts to Chicago's corrupt political machine. Adapted from a popular 1983 UK TV series, "Widows" starts out with a bang, a fiery explosion that leads to the death of Veronica's (Davis) husband Harry Rawlings (Liam Neeson). Soon afterwards, Veronica is paid a visit from a mob enforcer, warning that she has a month to come up with $2 million or face severe consequences to herself and her dog. As Veronica reels from the shock, she meets three other women in similar straits: Alice (Elizabeth Debicki), Linda (Michelle Rodriguez) and Belle (Cynthia Erivo). They decide to fight back by pulling off a robbery they're convinced the hoods will not see coming.

The best performance comes from Davis, who matches her moving turn in "Doubt," as an African American mother pleading the case for her gay son to attend a Catholic school; and in "Prisoners," where she gets enmeshed in an ill-advised kidnap plot. When she's on her game, Davis comes off as an implacable force capable of going down the line to achieve her goals, no matter what the cost.

To their credit McQueen and co-screenwriter Gillian Flynn provide an elaborate series of flashbacks that attempt to distill Lynda La Plante's 1983 miniseries. While the sound and fury produced a robust response (including laughter) from a San Francisco preview audience, the end result felt to me like a second-rate Elmore Leonard crime caper, a little too fanciful to be either top-drawer drama or stirring feminist tale, despite first-rate harangues from veterans Robert Duvall and Colin Farrell. (Opens Friday.)