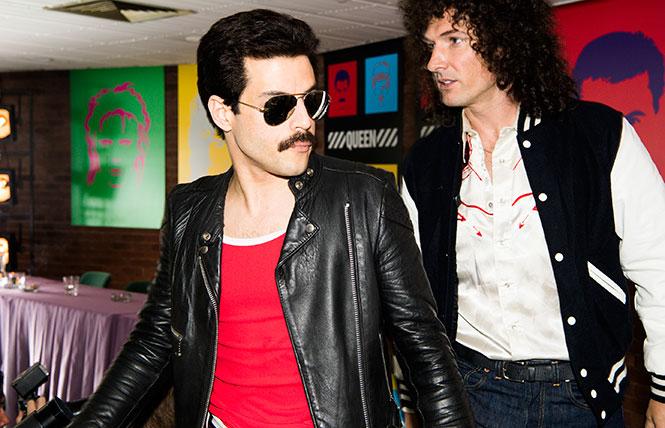 As the film opens, young Farrokh Bulsara (Malek) has changed his name to Freddie Mercury amid the disapproving glances of his conservative Persian parents (Ace Bhatti, Meneka Das), who aren't happy with their son's shag haircut and hip "London mod" style of dress. It's 1970, and the young Mercury spends his time clubbing around London. He soon becomes lead singer for a local band named Smile, and renames the band Queen.

Almost immediately Queen is recording hit records and touring for cheering crowds. As the band's star continues to rise, Mercury struggles with loneliness and with his sexuality.

"Freddie, you're gay," she says, as she ends their relationship.

Mercury does come to accept the fact that he's a gay man, dying of AIDS at age 45. 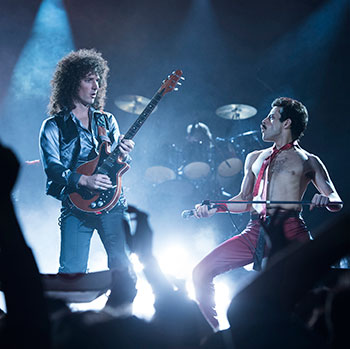 Prior to director Bryan Singer's "Bohemian Rhapsody," Rami Malek had a largely undistinguished career, playing supporting roles in the films "Twilight" and "A Night at the Museum." With his portrayal of Mercury, Malek emerges as a star in his own right. He looks and sounds like Mercury, and is electrifying in the film's lengthy sequence at Live Aid, the 1985 mega-concert that benefited famine victims in Africa. Malek, as Mercury, passionately pounds at the piano and struts across the stage, whooping both the onscreen and offscreen audience into a frenzy. The intensity of Malek's performance during this sequence, and during the film's other musical interludes, is mesmerizing.

Unfortunately, Anthony McCarten's screenplay is nowhere nearly as powerful as the star's performance. Too many people who were important to Mercury are seen as cardboard cutouts, with little if any backstory offered as to who they were.

There's Mary, the ex-fiancee, who remains his close platonic friend for the rest of their lives. Mercury even buys her the house next to his. No explanation is offered as to why they remained an important part of each other's lives. Mary simply shows up from time to time without saying or doing much of anything.

The same can be said for Mercury's parents, who do little more than stare disapprovingly as their son changes his name and seeks his fortune in the rock world. At the end of the film they're seen smiling proudly through their tears as they watch Live Aid on television. There's not even a hint as to how they their feelings about their son's career came to change.

Mercury's Queen bandmates are also given the shaft. Queen drummer Roger Taylor (Ben Hardy), lead guitarist Brian May (Gwilym Lee) and bass guitarist John Deacon (Joseph Mazzello) are always there, but the audience never gets to know who they are.

As a biopic, "Bohemian Rhapsody" falls short, failing to adequately examine Mercury's life and the people in it. Malek, who put so much effort into bringing Mercury to life, and who gives such a brilliant performance, deserves better, as does the audience.