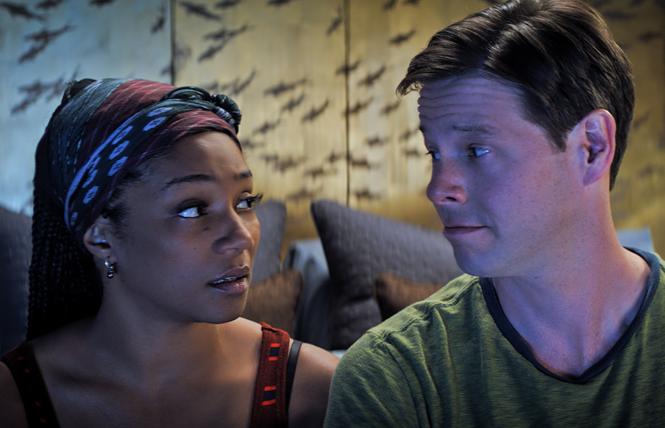 Tiffany Haddish and Ike Barinholtz in "The Oath." Photo: Courtesy of Topic Studios and Roadside Attractions

"God that I don't believe in, give me the strength to get through the next three days."

It's to the credit of first-time writer-director Ike Barinholtz that his just-released, hyper-confrontational, extremely dark, Thanksgiving Day-themed comedy "The Oath" will strike some as hopelessly over-the-top, while others, such as your movie critic, can't wait for a second helping.

The premise is simple. In the very near future, Americans are required to sign "The Patriot's Oath," pledging allegiance to the occupant of the Oval Office by Black Friday, the day after Thanksgiving.

The filmmakers astutely plant their ticking time-bomb plot in a Southern California suburban enclave where a mixed-race couple is planning a T-Day feast at which arguments about the Oath turn violent. 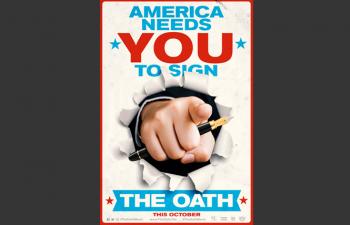 Ike Barinholtz and Tiffany Haddish are Chris and Kai, the couple whose quarrels quickly descend into levels of profanity that earn "The Oath" its "R" for pervasive language throughout, plus scenes of violence and drug use. "The Oath" bears scant resemblance to such traditional Turkey Day fare as Jodie Foster's 1995 family favorite "Home for the Holidays." Instead of pretty megawatt actors, the cast of "The Oath" — Nora Dunn, Chris Ellis, Jon Barinholtz, Meredith Hagner, Carrie Brownstein — are plain-looking if comically adept performers. Billy Magnussen and John Cho inject some sobering paranoia into their roles as Federal Homeland Security agents who grill Chris about his efforts to dissuade his guests from signing the oath.

The violence in "The Oath" reaches a fever pitch just as the audacity of its satire starts to wear a bit thin. Still, in a cinematic age lacking a Stanley Kubrick, to say nothing of a Preston Sturges or a Billy Wilder, "The Oath" is a comic oasis for partisans for whom midterm elections still appear a distant mirage.

"The Oath" opens Friday, with a soundtrack that includes "Just You Wait and See" performed by The Pretenders.