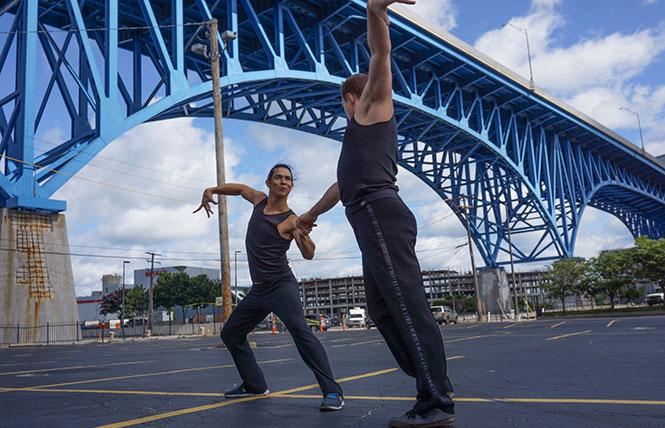 In "Hot To Trot," filmmaker Gail Freedman takes viewers inside the little-known, fascinating world of same-sex competitive ballroom dance. The film opens on Sept. 22 at the Roxie Theater. It focuses on two sets of dance partners, one male and the other female. Though they're not romantically or sexually involved, they consider themselves in relationships with each other. "It's like a fucking marriage," says one dancer. "But without the fucking."

There's Ernesto, a former meth head from Costa Rica who's unabashedly gay. He dances with Nikolai, a dazzling dancer from Russia who's only been out for a few months. Nikolai, who yearns to find love and to win the acceptance of his family, isn't at first comfortable with who he is. Before Nikolai, Ernesto dances with Robbie, a Hungarian who came to the U.S. to escape homophobia in his homeland. Ernesto and Robbie dance beautifully together until Robbie is sidelined by a brain tumor, so Ernesto partners up with Nikolai.

The two women are Emily, a Type 1 diabetic who wears an insulin pump, and Kieren, a career-minded woman whose acceptance from her family is hard-won. "The biggest stressor for me on competition day is my blood sugar, not the actual dancing," Emily says as she and Kieren swirl across the dance floor.

"Hot To Trot" follows the dancers over four years as they rehearse, compete, interact, forge romantic relationships with others, and deal with family. The dancing, which comprises a large part of the film, is dazzling. These dancers are athletes who glide across the floor with a mesmerizing sensuality. In one number, Ernesto and Robbie perform a hot tango as their shirts fall to the floor. "It's Fred and Fred, and Ginger and Ginger," says one dancer.

But Freedman's camera also follows these dancers into their personal lives. Ernesto speaks candidly about his five-year meth binge and about growing up poor in Costa Rica. Nikolai bares his soul about coming out and his desire for love. Emily talks about the challenges of maintaining her health. She shows the insulin pump that she wears even while performing. Kieren discusses her career in the tech industry, which is pulling her away from the dance world. There's an intimacy to these interviews that's close to personal conversations. Freedman has the ability to make the dancers feel like viewers' friends.

But "Hot To Trot" is first and foremost a dance film. There's excitement in the air as we see the two couples at a dance competition in Oakland. There's suspense when Ernesto and Nikolai make it all the way to Gay Games 9 in Cleveland. Will they win the championship?

"Hot To Trot" is also a political film. Same-sex couples are still not welcome in mainstream competitions. These dancers are making a statement about homophobia by competing in same-sex championships. They're taking their power and celebrating who they are, living and performing at the intersection of art and activism. Freedman mixes these aspects of the film expertly, creating a compelling viewing experience. The film is fast-paced, fun, thought-provoking, and most importantly, human.