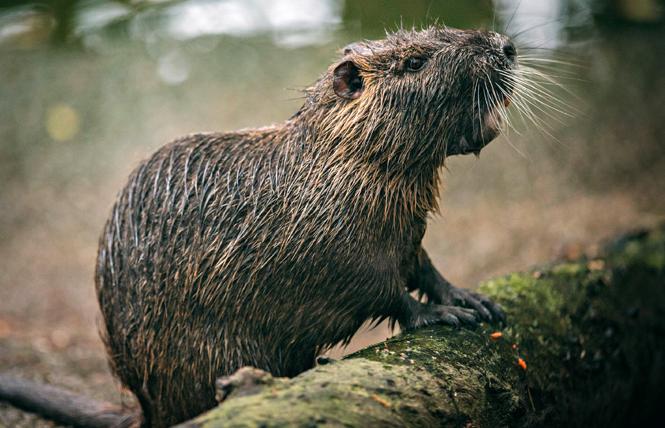 Nutria, also known as a swamp rat, is a semi-aquatic rodent native to South America. It's an invasive species in the Louisiana swamp. Photo: Chris Metzler, Tilapia Film

"Rodents of Unusual Size" I have to hand it to the "Rodents" directorial trio Quinn Costello, Chris Metzler and Jeff Springer. They've made a little gem that covers the waterfront on sensitive issues from wetlands erosion to animal rights, fur as a fashion statement, a cringeworthy source of protein, a witty update on post-Katrina Louisiana, a proud lesbian bayou hunter, and an update on Michael Moore's "Roger and Me" question: "Pets or meat?"

The film's subject is a beautiful or repulsive water rat (depending on your point of view) that weighs in at 20 lbs. and is literally eating away at the land mass and aquatic livelihoods of Southern Louisiana's fabled bayou country. Called nutria, the rodents are an invasive species that have forced authorities to offer a $5 bounty for proof that someone has actually killed one of the critters.

The doc gets off to a somewhat off-putting start as the filmmakers rub our faces in the physical aspects of the "rodent invasion." Later they try and make amends by taking us on a tour of Cajun kitchens where they bake, boil and sauté the creature nine ways to Sunday. Catching "Rodents" (opening Friday at the Alamo Drafthouse), you may have to substitute your black sense of humor for your gag reflex, but it's worth the effort to take in a spectacular chunk of Americana that cries out to be seen for the recipes alone. One of the odder moments comes from a nutria hunter who displays his long guns for killing the creatures while he cuddles his own pet nutria on his lap. Go figure!

"Crime + Punishment" is a provocative documentary, produced for the Hulu streaming service and getting a limited theatrical run, that examines corrupt practices by the New York City Police Dept. where rookie cops are encouraged to fulfill a quota of arrests. The young cops essentially prey on young minority men who are busted and get a criminal record for crimes they didn't commit, possibly nonexistent offenses.

Director Stephen Maing spent four years tracking the stories of 12 young cops who resisted the scheme, along with the tale of a young Hispanic man who served a year in NYC's Rikers Island prison on trumped-up drug charges. Maing focuses on the ways that city politics sometimes get ensnarled with sound police practices. My conversation with him began with my opinion that his doc resembled the great narrative exposé film about NYC police corruption "Serpico," as well as a 19th-century Russian novel.

David Lamble: Your title alludes to Russian author Dostoyevsky's story of a man who, seeking to escape the consequences of an irrational crime, wills more suffering on himself.

Stephen Maing: Here we have officers who are asked to commit crimes against the community, pressured to do so. Many of them suffered through great personal struggle and decided they wouldn't comply with those pressures to meet the [arrest] quota at any cost, fighting their own personal demons as well.

You blur the line between fiction and nonfiction, in the tradition of great TV crime shows such as CBS' "The Good Wife."

There's a really high bar of expectation in trying to present an issue that many people think they already know a good deal about. Stories of police corruption and police brutality are flooding social media every day. I wanted to present a cinematic experience that transcended that narrative. The film is character-driven, so we're not basing our story on a new spin on crime statistics or modern police theories.

Nutria, also known as a swamp rat, is a semi-aquatic rodent native to South America. It's an invasive species in the Louisiana swamp. Photo: Chris Metzler, Tilapia Film