Government by the rich 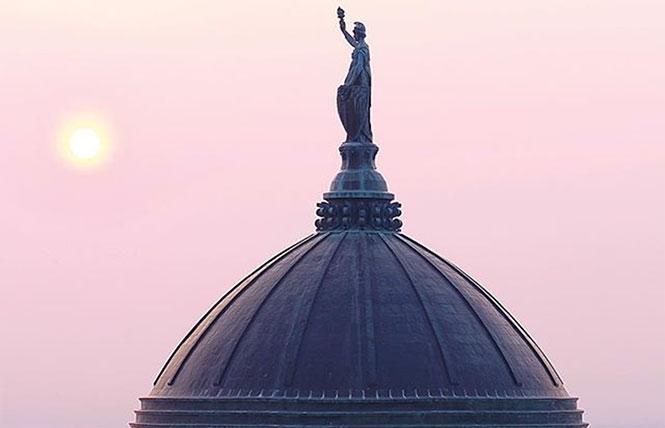 "The #1 rule of political reporting is 'Follow the money,'" says John Adams, capital bureau chief for The Great Falls Tribune from 2007-15, who covers campaign finance abuse in Montana. In a new documentary, he's seen driving his truck saying, "We need a strong, independent, fearless watchdog media to keep an eye on people in power," while his dog watches patiently from the back seat. This has always been true, but now seems truer than ever. Since the U.S. Supreme Court ruled in favor of Citizens United in 2012, corporations enjoy unchecked election spending. Detailing the fallout in Montana, "Dark Money" starts Friday at Opera Plaza and the Shattuck in Berkeley.

Why Montana? "People in this state have a good sense of the history of the excesses of capitalism," says a voter. In 1912, the state passed the Corrupt Practices Act to curtail the copper barons' reign by severely limiting corporate spending in elections. In its poetic opening sequence, "Dark Money" shows elegant snow geese in flight as voiceover tells us hundreds were killed in 1995 when forced to land in the giant toxic pit that is the headwater of the Columbia River. The result of unregulated mining, this Superfund site is a constant reminder of the mayhem caused when unrestrained capitalists buy and sell government.

The guy in the truck, John Adams, is an undaunted investigative journalist whose facial hair evolves from stubble to a waxed handlebar mustache and full beard over the course of the film. When The Great Falls Tribune shutters its capital bureau in 2015, fracturing its priceless institutional memory of corporate overreach, Adams packs up his stuff and starts writing out of his truck. In 2016, the 37-year-old founded The Montana Free Press, an online paper. His coverage of a landmark campaign finance case, "Commissioner of Political Practices for State of Montana vs. Wittich," gives the film its narrative arc.

"Dark Money" is the term for secret contributions from unknown sources that, since the Citizens United decision, flood our erstwhile democratic process. That's right, we're no longer a democracy but an oligarchy, thanks to the untiring efforts of the fossil-fuel-purveying Koch Brothers, who since the 1970s have pushed an arch-conservative, pro-business, anti-tax, anti-regulatory agenda. Today, their operation includes a one-stop campaign shop which provides consulting, direct mail, voter data, opposition research, website design, and attack ads. They even write letters to be sent out under a candidate's letterhead. This is one of the film's most chilling revelations.

Director Kimberly Reed has made one of the most important films in years, at a time when so many bogus infomercials are passing themselves off as documentaries. The disturbing dumbing-down of movies is itself a direct correlative to unchecked corporate power. "Dark Money" was also the title of a 2016 book by New Yorker writer Jane Mayer subtitled, "The Hidden History of the Billionaires Behind the Rise of the Radical Right." In it she tells the spine-tingling story of the Koch Brothers' drive to build a private political machine by dint of sheer wealth. At book's end, she quotes public interest lawyer Fred Wertheimer, who has fought money in politics since Watergate. "We have two unelected multibillionaires who want to control the U.S. Government and exercise the power to decide what is best for 300 million American people, without these people's voices being heard." Mayer's book provides perspective on the otherwise unrelated film's narrower focus.

The good people of Montana have much to teach the rest of the nation about the care and feeding of public institutions. "Dark Money" shows several sterling role models in action, whose down-to-earth public service is in stark contrast to all the preening narcissists now crowding media platforms. The film is a must-see for anyone who's thinking of voting in an election. Although Reed doesn't mention our current President by name, her film offers glimpses of the kind of support that propelled him into office. In a recent New Yorker article, "The Reclusive Hedge-Fund Tycoon Behind the Trump Presidency," Jane Mayer connects the dots.