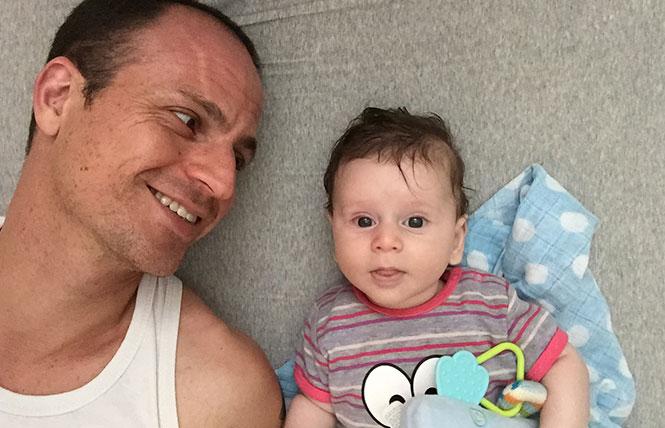 Elad Cohen is a deaf gay man who co-parents with a deaf woman in "The Sign for Love," part of the San Francisco Jewish Film Festival. Photo: Courtesy SFJFF

The 38th San Francisco Jewish Film Festival returns, with 49 programs ranging from a handful of LGBTQ-themed features to bio-tributes including the Castro Theatre's opening-night treat "Love, Gilda," an affectionate recollection of "Saturday Night Live" comic Gilda Radner, through the closing-night musical biography of the 1960s Rat Pack song-and-dance man "Sammy Davis, Jr.: I've Gotta Be Me." There's also the black-comedy centerpiece narrative "To Dust," the next-wave spotlight "The Man Who Stole Banksy," plus a collection of fiction and doc features from a myriad of countries, including Israel.

"The Sign for Love" Elad Cohen explores his own life as a deaf gay man from a hearing family who, from an early age, jumpstarted a new family of friends and lovers. Boldly deciding to co-parent with a deaf woman, Cohen (with co-director Iris Ben Moshe) shines a fresh light on a rough-and-tumble frontier society that has traditionally been the only place in the region to embrace gay communities. (Castro, 7/20; Albany Twin, 7/27)

"Red Cow" This Israeli-shot feature takes on the audacity of Benny, a red-haired, pot-smoking teen whose life gets beautifully but dangerously complicated when she meets newcomer Yael. Writer-director Tsivia Barkai Yacov grounds us in the lives of adolescents who dare to live large in a region of the world that often prefers young women to be neither seen nor heard. (Castro, 7/23; CineArts, 7/24; Albany Twin, 7/31; Smith Rafael, 8/5)

"The Prince and the Dybbuk" Just as a right-wing Polish government has attempted to criminalize honest accounts of the country's dark involvement with the Holocaust, this Polish-produced bio-doc arrives to examine the life of the man believed to have kicked off a golden age of Yiddish-language cinema. Michael Waszynski was a study in contrasts: openly gay in the late 1930s on the eve of the Nazi invasion of his country, he was also wed to an Italian countess. His direction of the 1937 Yiddish feature "The Dybbuk" was a blessing, while his conversion to Catholicism requires an in-depth examination of the man and his times. (Castro, 7/22; Piedmont, 8/4)

"Blue Note Records: Beyond the Notes" Whether you discovered them as a college radio DJ like I did, as a hip jazz aficionado, or as an expert on American culture, Blue Note Records was the place in mid-20th-century America to find the best in this country's original art-form, in recordings from Miles Davis, Coltrane and Monk. Sophie Huber's doc recalls a time when adults were still relevant in the cultural scheme of things. (Castro, 7/21; Piedmont, 8/5)

"Budapest Noir" (Hungary) Eva Gardos takes us back to 1936 as her countrymen began flirting with fascism. The story revolves around a hard-boiled crime reporter who meets a young woman who quickly turns up dead. Set on the eve of war and Hollywood's first infatuation with noir, in Hungarian with English subtitles. (The director will appear for an onstage chat with noir expert Eddie Muller at the film's 7/21 Castro and 7/22 CineArts screenings. Also plays Albany Twin, 7/28; Smith Rafael, 8/4)