On the road to discover Elvis Presley 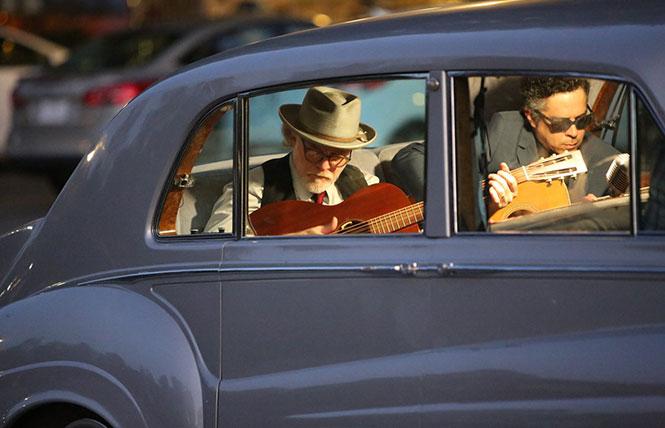 In 1977 I was holding down a news gig at a popular Dallas/Fort Worth FM Rock station when a bulletin came down over the wires that "The King of Rock-n-Roll," Elvis Presley, had been found dead in a bathroom at his Graceland mansion by his cook. My first move was to call famed "rockologist" Greil Marcus to tap into his thoughts about exactly what we had lost now that "Elvis had left the building" at the shocking age of 42.

Forty-one years later, famed documentary director Eugene Jarecki delivers an impressive cast of show-biz heavyweights - rapper Chuck "Fight the Power" D, Alec Baldwin, Rosanne Cash, Emmylou Harris, Ethan Hawke, Van Jones, Mike Myers, and Dan Rather, among others - to give their take on Presley from the backseat of his 1963 Rolls-Royce, a vehicle whose mid-film breakdown is itself a shocking development.

Opening Friday at the Clay Theatre in San Francisco, Berkeley's Shattuck Cinemas, and the Christopher B. Smith Rafael Film Center in San Rafael, "The King" is a vastly entertaining and at times uncomfortably intimate account of a life whose rise and tragic fall Jarecki asserts is a metaphor for a parallel demise of the American Empire. The film is an R-rated cinema rollercoaster ride that takes us from Elvis' very modest beginnings to a mid-1950s debut that carried him, not only to the top of the pop charts, but also to the role of American cold-war weapon.

"The King" makes the case that Elvis was trapped between two daddies: Sun Records founder Sam Phillips, who sought to make crossover stars out of black singers like Big Mama Thornton; and a less savory daddy, Col. Tom Parker, who succeeded in turning Elvis into a rock-n-roll cash machine right up to and even after his late-1950s induction into the American Army. One of the odder segments in the film is the sight of Elvis with a GI haircut singing for American and German civilians just before the rise of the Berlin Wall. There's an amusing account of German Presley fans describing their country's cultural submersion in an onslaught of American rock, led by Presley over American Armed Forces Radio. "The King" also documents the passing of the rock torch when, in 1963, a certain "Fab Four" from Liverpool began competing for pop-chart positions and radio airtime.

"The King" is at its best and most disturbing when the filmmakers demonstrate the weird competition that broke out among TV powerhouses for the ratings jolt that a Presley appearance could generate. At first, CBS "Sunday Night" host Ed Sullivan sniffed that he wouldn't think of booking Presley's immoral hip gyrations on his popular variety hour; then Sullivan rival Steven Allen grabbed Elvis, and Sullivan had to do an embarrassing about-face.

The movie makes claims that Presley developed his drug habits while standing guard for the Army in Germany. Whatever the explanation, Presley's weight and skin tone went through some sad changes in the last decade of his life. Before the drug binge, a 20-something Elvis was gay male pin-up material. "The King" also documents Presley's Col. Parker-initiated Hollywood period, when the King churned out a series of mediocre beach-blanket movies that can still be caught from time to time on Turner Classics Movies (TCM).

While African American critics such as Chuck D accuse Presley of cultural appropriation for getting chartbusters out of black music, hits denied black singers like Big Mama Thornton and Little Richard, Chuck D concedes that Sam Phillips had little choice but to give Elvis a shot at songs the American public wasn't buying from black artists.

"The King" comes to a sad end, a drug-fueled demise made all the more poignant by Elvis' final rendition of "Unchained Melody" on TV. Still, "The King" is a fabulous bit of cultural history that is as entertaining as any piece of Americana on the screen. Some weekend screenings of the film will feature Q&A sessions with director Jarecki and famed pop-music critic Greil Marcus, whose pioneering writings on Presley are must-reading.