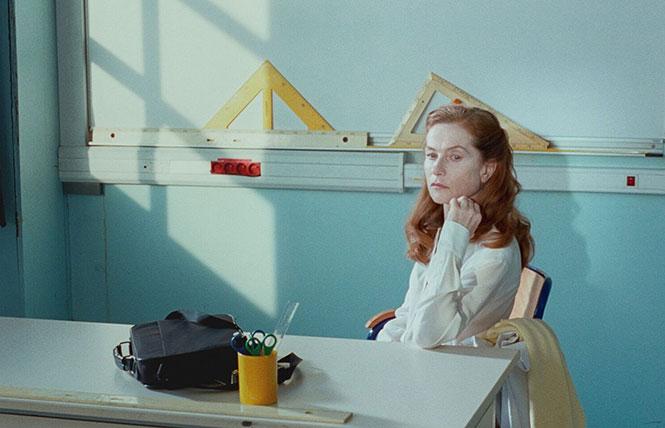 Bette Davis was the greatest USA screen actress of her time, and no one's come along since to rock her crown. Meryl Streep is such a wimp, so clever and genuinely comic, but so slight. You can't imagine her fighting studio bosses to pursue a career. She'd never slug her bridegroom on the platform of their honeymoon train. Although Isabelle Huppert long ago married as wisely as Streep, she brings to the screen a quality of despair capable of any infamy. No surprise she commits atrocities in the surreal sci-fi horror film about French national education "Mrs. Hyde," at the Roxie starting Friday, June 22.

Bette never stopped working, which led to her taking parts in movies so far beneath her genius it was embarrassing, even boring. Sometimes it seems as though Huppert is stuck in a similar rut, performing her shtick in flicks designed for her signature deadpan ennui. Although "Mrs. Hyde" leaves a lot to be desired, its storytelling wobbly, not for an instant did I feel that Huppert, now 65, was repeating herself. She generates spasms of vulnerability as an overworked, undervalued high school teacher devoted to the elegance of scientific thought.

The plight of schoolteachers at the mercy of hooligans is the context of this melodrama set in the Arthur Rimbaud High School, where Marie Géquil teaches physics. Huppert is scrawnier than ever, like a sinewy, wizened ballet mistress with a bobble-doll head atop a perfectly erect spine, her red hair undulating down a boney back. She is outmatched physically by a class full of Arab teenagers who wisecrack through her lectures. Even the two young white women give her attitude. She has a pet Arab student named Malik, a paraplegic who uses a walker, whom she's determined will outperform expectation.

After 16 minutes of lackluster set-up, which includes a listless househusband and foppish school principal, Géquil (pronounced "Jekyll") finally catches fire, literally, when a lightning strike overloads the school's circuits. The scene in her physics lab in a trailer, in which she has a mad brainstorm in a white lab coat, will disappoint fans of Universal horror films. This is her Colin Clive moment, when she creates a monster with the aid of heavenly fire, but director Serge Bozon does not know where to put the camera. One errant zap, and she falls to the floor and out of sight. What might have been!

In "Man-Made Monster" (1951), Lon Chaney, Jr. glows like a lightbulb due to an excessive electrical charge forced on him by be-goggled maniac Lionel Atwill. His head and hands are giant glowworms. Not all the time, only when Atwill straps him down and turns on the juice. Post-lightning, Géquil is able to self-activate a power surge that makes both her and her nightgown glow in the dark. Not knowing how she does this, or when she decides to, or why, lessens our investment in this innately thrilling superpower.

The most electrifying scene involves a student with long blonde hair being placed inside a Faraday cage when an Arab student is instructed to crank up the juice to 100,000 volts. But the most devastating sequence shows Géquil's answering a student's question about a mysterious "woman of fire" terrorizing the housing project known as City 2000. In a tour de force monologue, Huppert manifests the Jekyll-Hyde split in consciousness as an eerily disjointed combo of clearly enunciated logic and obscure psychic turmoil. It's a must-see for students of the criminally insane.