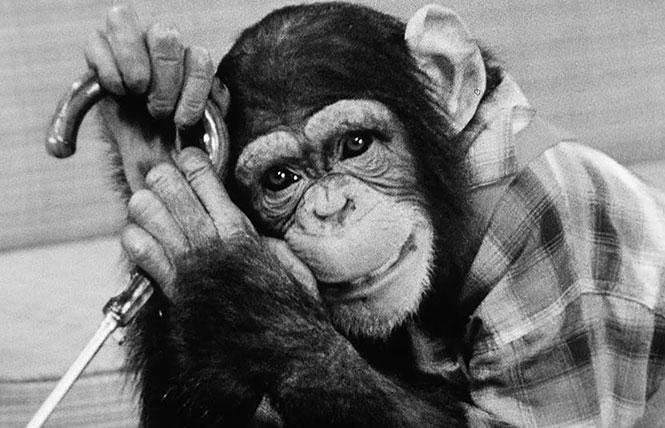 Cobby is a 60-year-old male chimpanzee who has lived at the San Francisco Zoo for 50 years. He's on display with longtime roommates Minnie and Maggie, each about 50. Ages are approximate because no one kidnapping baby chimps in Africa leaves a paper trail. These three were reared separately by humans and now depend on institutionalized care. They don't have it so bad. The new documentary "Cobby: The Other Side of Cute" is a biopic that touches on the abuse of captive chimps, playing SF DocFest at the Roxie Sunday, 6/3, at 2:45 p.m., and Monday, 6/4, at 7:15 p.m.

Filmmaker Donna McRae fell under Cobby's spell in the 1960s watching TV as a young girl in Adelaide, Australia. The Calvin Company of Kansas City, Missouri had produced 156 episodes of a five-minute program called "Cobby's Hobbies," featuring a young chimp in human dress, his gal pal Cobina with a wig of blonde braids, and his conscience in a halo. McRae interviewed a handful of other Australians who were similarly hooked as youngsters, one of whom was nicknamed "Cobby." Only McRae was so haunted by the perky theme song she spent years stalking the star to his current residence.

"Cobby" opens with McRae driving north along Highway 1 from L.A., narrating her quest in a lilting Aussie twang. At the zoo she's thrilled to meet her childhood hero until it dawns on her he's an old man with other things on his mind. Her curiosity leads her backwards through Cobby's past to the widower of his former keeper, the daughters of the man who raised him as one of his own children, the editor of the TV show, its writer-director, and the actor who voiced Cobby. Linking these fascinating vignettes are clips of the sexagenarian zoo animal as a charismatic child star.

As a docent at the zoo, I'm obsessed with the human-animal continuum and how oddly it manifests. Ever since I heard Cobby was a TV star, I've been dying to see his old films. Now that chimpanzees are recognized as one of our closest living relatives, sharing 98% of our DNA, it's a huge no-no for an enlightened human to exploit them. As a former actress, I relate to that exploitation, but I want to see him perform. The few excerpts of "Cobby's Hobbies" we're shown demonstrate the star's comic range, from gentle whimsy to Surrealist anarchy, reminiscent of the young Harpo Marx. 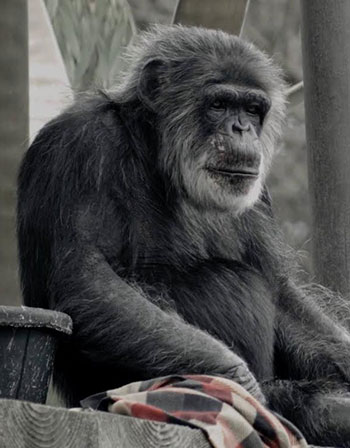 "Cobby" reaches its aesthetic climax in an extended archival sequence about his latest hobby. A mellifluous announcer asks, "What, besides the right equipment, does it take for the job of film editing?" as Cobby starts messing with an editing station. "It takes an individual with these qualities: manual dexterity, dramatic judgment, storytelling sense, a feel for pacing and tempo, endless patience," Cobby madly unspools reels of film, "and most of all, an ability to take genuine pleasure in ruthlessly discarding most of what so many have worked so long and so hard to produce." I was laughing out loud at the comedy, the tragedy, and the director's self-satire.

As a performer, Cobby seems to channel the fantasies of his human dad, trainer, and boss Murray Hill, a fascinating guy. But when the child star outgrew his cuteness, he was left at the San Francisco Zoo. I feel for the has-been whose star status has been reduced to never-ending performances of himself behind bars. What a metaphor. How Kafkaesque. Where's the Victor Hugo who'll write a 700-page novel about the existential hell of Cobby's final hobby? I've seen him get temperamental, rocking sideways like a drunken Popeye from foot to foot, swinging his arms. I've heard the crowd laugh at him. He's a sensitive artist no one seems to understand.

At the one-hour mark, "Cobby" switches focus to the plight of captive chimps, a huge topic beyond McRae's grasp or her film's compass. Dr. Stephen Ross, of Lincoln Park Zoo in Chicago, chairs the species survival plan for chimps, monitoring the nation's zoo population. He tells us, "Cobby is the oldest male chimp living in an accredited zoo." Animal lover Kim Forwood fights back tears telling how she stopped the San Francisco Zoo from secretly relocating Cobby, Maggie, and Minnie to another facility. Calling him a revered elder, she says, "I want Cobby to be respected in his home. They're older. They deserve to be happy every moment they're there."

Other chimps are not so lucky. "Cobby" preaches compassion for chimps and monkeys tortured in the name of science, from rocket test-dummies killed in flight to AIDS patients whose suffering wasn't applicable to the human version. Several hundred chimp refugees from biomedical research now need sanctuary. Theodora Capaldo, executive director of the New England Anti-Vivisection Society, has the final word. Calling for "a major shift in how human beings interface with other animals," she says categorically, "It is not a subject-object relationship. It is a subject-subject relationship." That's all, folks!