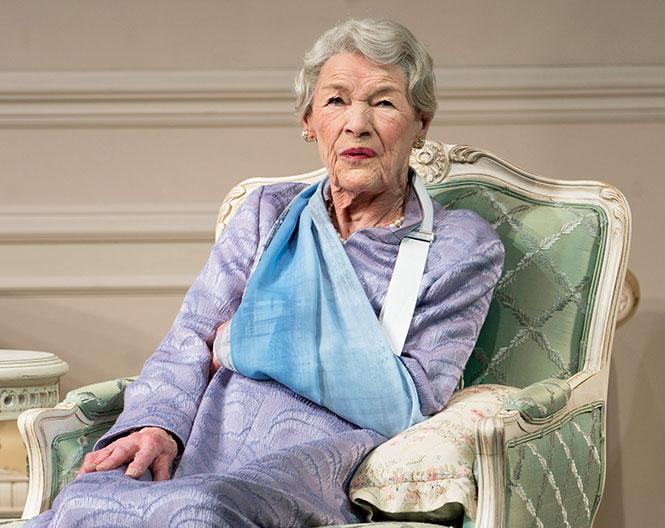 Last year, British actress Glenda Jackson was given an Evening Standard Theatre award for her performance as King Lear. As the audience rose to their feet to congratulate her when she got to the podium, her first words were, "We don't do standing ovations in England!" She continued, "As a working professional actress, I never got a good notice in the Evening Standard paper, and when I ran as an MP for Parliament, I was the wrong political party, and as the paper is run by a conservative, I'm left to wonder what I did wrong, so thank you!" This contrary speech encapsulates Jackson as both a person and an actress. At 82, she has returned to Broadway this spring in Edward Albee's "Three Tall Women," and is the frontrunner to receive the Tony award for Best Actress in a Play (she's been nominated four times previously). She has received critical raves for her rendition of Albee's ferocious adopted mother.

From 1992 to her retirement in 2015, she represented the liberal Labor Party in Parliament, then returned to the stage at the Old Vic to take on probably the most difficult theatrical role in the canon. Jackson has never taken the easy way out, which has made her both fearless and intimidating as an actress and personality.

England knows her as much for her stage work, but in America we know her primarily for her films, especially in the 1970s during her Hollywood heyday. Born in 1936 to working-class parents, she started her ascent as a member of the Royal Shakespeare Company in 1964 under the tutelage of the legendary iconoclastic English stage director Peter Brook. She rose to prominence as the murderess Charlotte Corday in Peter Weiss' "Marat/Sade" play in 1965, a role she repeated on Broadway, then later in the 1967 film. But it was her quasi-emancipated sculptress Gudrun in Ken Russell's "Women in Love," based on the D.H. Lawrence novel, that was her breakthrough, winning her an Oscar as Best Actress in 1970, setting her movie persona as intelligent, independent, opinionated and imperious, yet exhibiting a sensual earthiness. More than any actress of her time she was willing to do nude scenes, unusual even in the early 1970s. Russell was probably her favorite screen director, as later in 1970 she appeared in his film about Russian composer Peter Tchaikovsky "The Music Lovers," playing his mentally unstable nymphomaniac wife Antonina Miliukova, even though he (played by the gay Richard Chamberlain) was homosexual. Critics hated it, though it has since become a cult favorite.

1971 would be her glory year, when she gave probably the two greatest film performances of her career. First she played Queen Elizabeth I in the BBC-TV production "Elizabeth R," phenomenally successful in England and, when imported to America, virtually launched PBS' new series "Masterpiece Theatre." She won two Emmys for her performance. Second, she played divorcee Alex Greville, caught in a romantic triangle as the lover of a younger bisexual man (Murray Head) also romancing an older doctor (Peter Finch) in John Schlesinger's masterpiece "Sunday Bloody Sunday." It ranks as one of the best mainstream LGBT films ever made, years ahead of its time because Finch's character is well-adjusted and not the least bit ashamed about being gay. Jackson was nominated for another Oscar as a woman in quiet upheaval. She luminously conveyed the ambiguities of the independent modern woman.

In 1973, she was able to show her comic side in "A Touch of Class," portraying another British divorcee, this time having an affair with a married American man (George Segal), and to their mutual horror finding they are falling in love with each other. The picture was nominated for six Academy Awards, and won Jackson her second Oscar as Best Actress. She went on to give two more tour de force performances, as Hedda Gabler in "Hedda" (1975) and as poet Stevie Smith in "Stevie" (1978), which earned her two more Oscar nominations. She was marvelous in the underrated Joseph Losey "The Romantic Englishwoman," playing the discontented wife of a successful novelist (Michael Caine) seeking solace with a mysterious younger German man, with zippy dialogue provided by Tom Stoppard.

In the late 70s she continued to indulge her comic flair, playing a conniving nun in the Watergate satire "Nasty Habits" (1977), and finding a leading man who could keep up with her prickly intelligence in Walter Matthau, playing his love interest in "House Calls" (1978) and "Hopscotch" (1980). In the 1980s she did more television work, playing actress Patricia Neal felled by a stroke in "The Patricia Neal Story" (nominated for another Emmy), and finally a role to match her politics as Yelena Bonner, the wife of a Russian dissident opposite Jason Robards in "Sakharov" for HBO. She found stage success on Broadway as Nina Leeds in Eugene O'Neill's "Strange Interlude" (1985), but was a surprisingly wimpy Martha in an LA production of "Who's Afraid of Virginia Woolf?" (1989) directed by its playwright Edward Albee. They wound up hating each other.

Disgusted by Thatcherite politics (Britain's version of conservative Ronald Reagan), she lost a 1990 bid for Parliament but won in 1992, retiring from acting. She served for 23 years, and initially was seen as possible Prime Minister material, but was waylaid by the rise of Tony Blair. She was contentious and lacked diplomacy, though very loyal and hardworking for her constituents. Her biggest moment came when Margaret Thatcher died in 2013, and rather than bury the hatchet in praise like the rest of Parliament, Jackson cut her to pieces to the disdain of other members. Her speech, well worth watching on YouTube, was in retrospect an audition for her return to acting a little over two years later, and is one of her best performances, featuring all her contradictory sparkling intensity and rough candor.

In her old age, she seems to take pride in her at times abrasive feistiness, driving some interviewers to tears, lampooning the absurdity of their questions. There was no one like her in the 1970s, and in her long absence no one has risen to take her place. She is part of the magnificent generation of English actresses born in the mid-1930s that produced three other icons of stage and film: Judi Dench, Maggie Smith, and Vanessa Redgrave. Yet Jackson remains unique. We can only hope that she will be given the opportunity to deliver one last great film performance (perhaps an old-lady role not nabbed by Meryl Streep), which would be a capstone to an odd but singularly brilliant career.