No masterpiece by Jean-Luc Godard 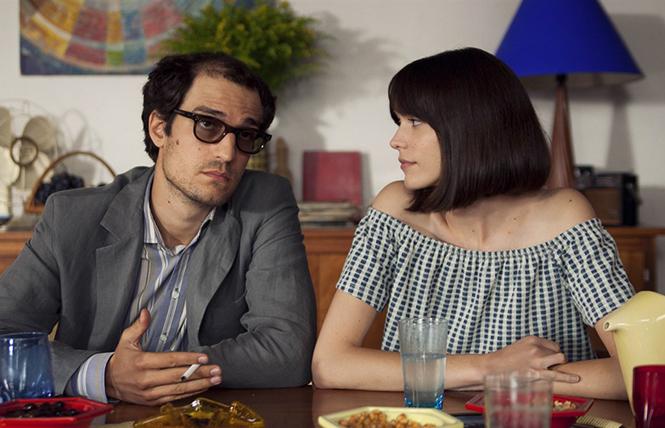 Jean-Luc Godard said, "Politics is like shoes. There's a left and a right, but eventually you will want to go barefoot." The new docudrama "Godard Mon Amour" (opens Friday) is, like many of the cinema artifacts associated with the now 87-year-old elder statesman of the 1960s French New Wave film school, a political-sexual-philosophical jigsaw puzzle that no two persons, whether Godard fan or not, will choose to assemble in quite the same way.

An aspiring cinephile who took his youthful marching orders from The New York Times, I quickly inhaled the 60s work, but the one film that literally changed my life, altered my mental perceptions and body chemistry, was the 1965 Godard masterpiece "Pierrot le fou." The film concerns the misadventures of a handsome kept man (Jean-Paul Belmondo) who impulsively abandons his wealthy wife in Paris, and flees southward with a feckless young woman, Marianne (Anna Karina). Their short-lived spree ends fatally.

My then-21-year-old self was ejected from the art-house into the streets in a state of what I would years later recognize as a marijuana high. No film, before or since, has ever come close. I loved "Breathless," "Weekend" and a host of other early works where Godard was rubbing sticks together and producing the sort of sparks that would by 1968 encourage armies of young demonstrators to take to the streets to topple the post-WWII-era old order.

"Godard Mon Amour," from Michel Hazanavicius, unfolds in 1967, as a now-middle-aged Godard (Louis Garrel) is having a carnal/political affair with a young woman (Stacy Martin). The resulting drama has been labeled by one prominent film critic as a great idea but a lousy movie. I wouldn't go that far, but I did find the drama heavy going, a non-enticing talk fest where my lack of connection to the film's message led me to fixate on the bad haircut the young and still very handsome Garrel has submitted to, a shaving of his hairline to mimic Godard's then-receding one.

"Godard Mon Amour" is a film strictly for Godard devotees, fans who never jumped from the train even when its journey seemed lost in a fog of outdated political slogans and stale cant. It's a pity, given the electricity injected into our national debates by the Parkland High anti-school-shooting movement, that "Godard Mon Amour" arrives as more stale nostalgic curiosity than call to action. Take my advice, rent a good Louis Garrel drama, such as "The Dreamers" (2002), about the 1968 French youth protests.