The Other Michelangelo: Antonioni 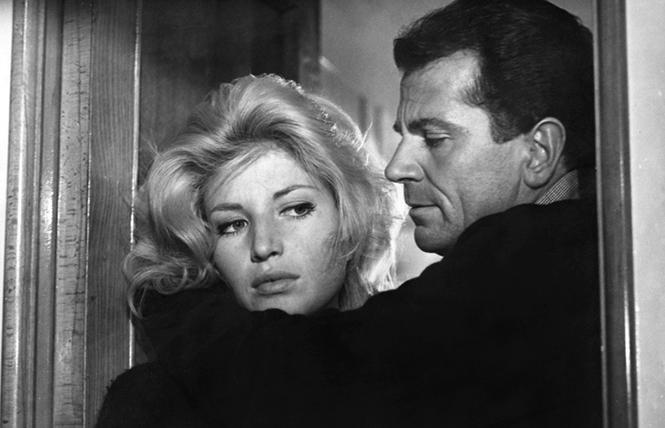 When I first saw Antonioni films as a young actress, I was spellbound by their beauty, intelligence, rigor, elegance, design, grasp, reach, generosity, compositions, montage, but mostly the world of the Italians who knew better but couldn't do better. At the time, I didn't see the critique, only the sensuality. Now I see the critique. Antonioni is mad at people for not being better artists, better humans, when we have the weight of Western Civilization in ruins around us. Fifty years later, at least we have these luminous remnants to gaze into as we slouch down deeper into the slough. The first two films are the best, and priced to sell at $12 each. The last two are in English at $14. There's a party at 8:30 p.m. See you at the Castro Theatre on Saturday, April 28.

"L'Avventura" (1960, B&W, 140 min., 35mm) The postwar boom brought an influx of material goods and construction projects to Italians who had been through the horrors of Mussolini and strategic bombing by USA. They were making a comeback, but were the old reflexes still there? Love, Honor, and Faithfulness are challenged on a small craggy island and amidst antique Italian glories of civic architecture. When your best friend goes missing on a boat party, how long do you keep looking for her, before succumbing to the charms of her shallow-souled boyfriend? Cool, silken, delicious Monica Vitti's bland glam deadpan masks a quicksilver sensibility. Whimsical and biting ensemble players from the land of Commedia dell'Arte. (10:30 a.m.)

"L'Eclisse" (1962, B&W, 125 min., 35mm) Antonioni organizes his universe as a series of vignettes with chaos just an edit away. The narrative is loose-weave, so the camera can catch what it will, and montage can prolong a sequence past obvious dramatic value. He frames Monica Vitti against urban landscapes where new construction meets scrub, and a classical building hides men's panic over stock prices. She moves through the movie like a melancholy goddess hurt by men's abandonment of traditional pieties. She leaves a tepid lover only to fall for Alain Delon, whose beauty might be skin-deep. Books and paintings are no protection against widespread ennui. Pure cinema and social critique wrapped up as an off-kilter aesthetic manifesto. (1:30 p.m.)

"Red Desert" (1964, color, 115 min., restored digital) Richard Harris is an alien presence in an Italian cast, a globalist whose dyed yellow hair never sits naturally on his scalp. His skin color is toxic, like the chemical corporation he inherited from his father. He's the last man Monica Vitti should turn to for solace, perhaps, after her suicide attempt in a mental hospital. And yet. This difficult film posits a hostile environment of smoke stacks, oil spillage, and cargo ships, which is not a reality anyone in their right mind should reconcile themselves to, but Monica must be a mother to her son in this brave new world. By turns morose, maudlin, and melodramatic, this portrayal of the human canary in the coal mine of corporate pollution remains prescient. (4 p.m.) 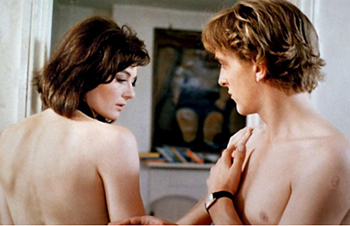 "Blow-Up" (1966, color, 110 min., restored digital) A meditation on the dangers of aesthetic hedonism in the face of political evil, with Jane Birkin and Charlotte Rampling as orgiastic extras, this swinging 60s romp is a mystery wrapped in a conundrum disguised as a shadow. Vanessa Redgrave stands in for Vitti as the wide-eyed beauty, but it's David Hemmings who's the innocent, so distracted by his success as a trendy photographer he fails to grasp the significance of the image. Until he does. This film articulates the canker in the rose of apparent prosperity in the West: a media blind to secretive forces is reduced to pimping senseless self-indulgence. Hemmings is Hamlet in tight white pants developing his own negatives in a dark room. (6:30 p.m.)

"The Passenger" (1974, color, 124 min., 35mm) "People will believe what I write. Why? Because it conforms to their expectations. And of mine as well, which is worse." This, the lament of a journalist (Jack Nicholson) who has had the camera turned on him by an interviewee and been revealed in all his whiney American sincerity as a lightweight. This film packs a wallop due to its stunning final seven minutes after a dilatory travelogue from Africa to London to Munich to Barcelona and dusty Spanish roads beyond. Nicholson bravely lends himself to be discovered as a superficial charming twerp, rather than the badass he often pretended to be. Post-colonial African gunrunning is a subject best viewed obliquely. (10 p.m.)

Amelia Antonucci's name appears nowhere on the program but met me at the publicist's, who had laid out an ironic plate of Milano cookies in response to my request for pastry. Amelia, a 40-year veteran of the Italian Ministry for Foreign Affairs, has taken it upon herself to promote Italian classic film in San Francisco, and for this we say "Grazie" to her, and to her backers here and abroad. Gesturing with eloquent hands and dressed like something out of vintage Antonioni, with her pearls, gold jewelry, red lipstick, in a navy pantsuit, she communicated to me a passion for the filmmaker that rekindled my own. These films remind us what art is: a quest for the answers we are afraid to hear, yet long to be told.