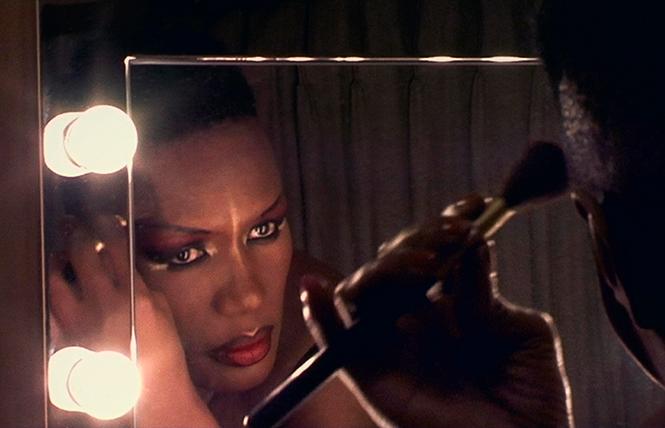 Don't be put off by the weird title of the new bio-pic about Jamaican-born singer-performer Grace Jones, "Grace Jones: Bloodlight and Bami." Nor by the fact that the filmmakers have run about 20 minutes past the advertised running time of 93 minutes. These are minor misdemeanors, not disqualifying sins.

The film kicks off with theatrical panache as the veteran singer-actress gives a worldwide fan-base what they crave, her own special blend of erotically tinged blues and pop. Her song titles alone speak volumes: "Pull Up to the Bumper," "Love Is the Drug." Backstage, a hyper-happy male fan, armed with a Sharpie and a record album, pleads with his diva. "Grace, I've waited 25 years to see you!"

Jones responds kindly but firmly, laying down the rules of engagement, the unspoken irony that an autograph line must be conducted by her rules alone. "One [signature] only, give me your favorite item. Hurry up, dear, my mother's waiting backstage."

Director Sophie Fiennes divides her piece into two worlds: Grace on the road in full performance mode, and Grace at home with her extended island clan. I label the first part "Grace, all business," and the second, "Trouble in Paradise," indicating the odd trajectory that small-island-nation folks have to navigate in this post-superpower universe.

When she's rehearsing or planning to perform in Paris, New York, or other culture hotspots, Jones is very particular about her workspace, that all hands on deck be as committed to the project as she is. Explaining that her financial survival depends on the concerts paying for the records, and the records creating demand for the concerts, Jones screams over the phone to her producer, "Robbie, I'm paying for the record myself, and I'm worried it won't be done on time!"

In a film that showcases unguarded moments with family and island friends, Jones gives pithy quotes. Reflecting on the importance dance music has had in fueling her spectacular rise up the Billboard charts, she notes, "I'm serious: Disco really was like going to church." Perhaps the liveliest segment is when she tells off the Paris crew that has constructed a stage set she feels frames her in a lurid, almost pornographic context. "I'm like a madam in a whorehouse. I'm like a lesbian madam, with all her girls dressed as in a brothel. I'm a pimp. I am the madam of all these girls. Give me a fucking break!"

The hardest part for Grace Jones fans to accept is the long, rambling section where she describes physical abuse at the hands of her Bible-obsessed father. "You weren't allowed to watch TV. All of that was forbidden. If you were caught doing that, you'd be beaten for a week. My father would declare as he was beating me, 'I'm doing this because I love you.' Whip, whip!"

"Grace Jones: Bloodlight and Bami" is a bit of a puzzle: there is too little introduction of family members. The film could have done with a "Frontline"-style narration. The photography is excellent, quite in the cinema verite fashion, so that in the best moments you feel like a fly on the wall. The production numbers are also first-rate, and the film should expand Jones' fan-base. One technical glitch: the dense blue font chosen for the closing credits, impossible to decipher on my screener copy.

Grace Jones is a fabulous act, far more than the sum of her over-the-top costumes, hairstyles and stage sets. A few quotes: "Love is a drug, and I need to score!" "Men all need to be penetrated at least once!" Rated R, mostly in English, with readable subtitles for sections in the local dialect. Opens Friday.