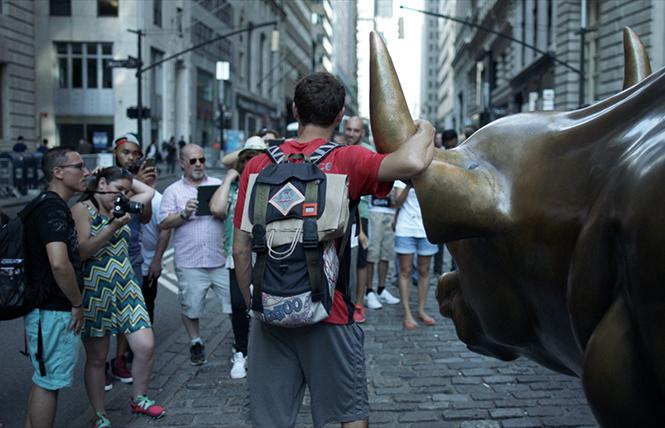 Is there a fitting new genre in which to toss "The China Hustle?" Spanning the globe from film activist Michael Moore's Flint, Michigan industrial wasteland to a toxic, virtually abandoned factory in the Chinese interior, this 82-minute muckraking documentary may kick off a Trump-era version of Depression-era film star W.C. Fields' adage, "Never give a sucker an even break."

"The China Hustle" introduces us to the insider Wall Street term "reverse merger," meaning that to get past a serious probe of their financial bona fides by the Securities and Exchange Commission, a new breed of Chinese stock hustler is seizing the shells of bankrupt Rust Belt US companies, acquiring their stock-market niche to swindle unwary American investors.

The film begins with a blunt warning from the film's onscreen host, Flint-raised Dan David, who calmly opines into the camera, "There are no good guys in this story, including me." There follows a long line of observers and participants, some with newly shredded reputations, including that of retired General and former presidential candidate Wesley Clark, who actually flees the film interview, clearly frightened that his reputation was headed for Nixonville. The filmmakers provide a brief history of financial shenanigans, and a visit to a GOP-dominated Senate hearing where Republicans seem to greet the fleecing of their constituents with indifference bordering on contempt. On the Democratic side, Sen. Elizabeth Warren is dogged but severely outgunned.

"The China Hustle" uses a series of experts to explain how these new-breed horse thieves operate, and why Chinese authorities are unlikely to rein them in. The filmmakers argue that China's game plan, under its newly elected leader-for-life, is to use the good reputation of the American trading markets to engineer their own "Wild West" version, where's there's no sheriff, no rules, and no way to regain stolen pensions and other nest eggs. One commentator, familiar with China's investment scene, notes that any Chinese whistleblower who threatened the current scam would probably literally be taken out and shot.

American seniors appear on screen to report their losses to the China hustle, which range between $100- and $150,000. This makes for a fine companion piece to whatever our leader is up to with his raising of tariffs and jawboning about China's longstanding practice of stealing intellectual property from US companies attempting to gain access to China's domestic market, largest in the world.