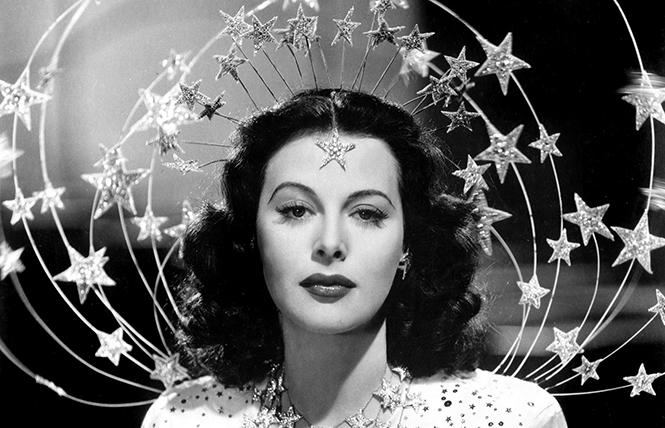 There's a rule of thumb that low-budget films depend to a disproportionate degree on their titles to get even the slightest traction at the box office. If that's true, then the backers of one new film, "Leaning into the Wind," are in for plenty of heartache, while the other, "Bombshell: The Hedy Lamarr Story," just might turn into a sneaky sort of indie hit.

Back in 1974, Mel Brooks was looking to make a second under-the-radar comedy to follow up on the unexpected success of "The Producers," an audacious, dark show-biz spoof in which a venal shyster gets old ladies to give him money for afternoons of piggyback rides. Brooks, with the help of black stand-up comedy artist Richard Pryor, produced a faux Western, "Blazing Saddles," which was a series of inside Hollywood jokes. One of them had an unscrupulous land swindler (TV star Harvey Korman) turn red in the face whenever somebody called him Hedy Lamarr. "That's Hedley," he would snarl. The joke was a cruel pun on the name of a once-gorgeous Austrian-born starlet who, still alive in 1974, had by that time lost her looks, her money, and even control of the patent on a vital war weapon.

Even before she left her Nazi-threatened Austrian childhood home, it was clear that Hedy Lamarr (1914-2000) was not just another pretty face. The future screen star had a serious side, an ability to compete with the boys in the laboratory as well as in front of the cameras. As a scientist, she discovered underlying theories that have paved the way for such digital-age breakthroughs as WiFi, GPS and Bluetooth. What did she get for her trouble? Mostly heartache, as her techno innovations were ripped off by men tied to the American war machine.

Lamarr was a Hollywood movie star hailed as the most beautiful and glamorous in the world. But that was only the surface that tragically obscured her true talents. Foremost was her inventive genius that a world blinded by her beauty could not recognize, as far back as her youth in Austria with her homemade gadgets. This film explores Lamarr's life, including her escape from a loveless marriage, on the eve of the Nazi-fication of Austria, for a new career in Hollywood. But her intellectual contributions were denied their due, even when she offered them in the service of her new home during WWII.

Director Alexandra Dean gets the most out of a peculiar mix of on-camera interviews, archival footage and recently discovered audiotapes of Lamarr explaining herself posthumously. At times going by the stage names Hedwig Kiesler and Hedy Kiesler, Hedy Lamarr left behind more than one lifetime's worth of accomplishments. Sadly, until this film, her legacy could be summed up with a pithy quote from Wikipedia: "The ladder of success in Hollywood is usually agent, actor, director, producer, leading man. And you are a star if you sleep with them in that order." Opens Friday.

Now for the story of a contemporary oddball who's had a bit more success in claiming credit for exploring facets of our planet invisible to most eyes. "Leaning into the Wind" follows 60something naturalist artist Andy Goldsworthy as he roams the natural world in remote areas of Scotland and France.

Director Thomas Riedelsheimer provides a kind of sequel to his 2002 eco-doc "Rivers and Tides" by revealing a mind and sensibility special enough to need a translator even for viewers who speak his native English. Content may elude even the most diligent. Even if you're a Goldsworthy fan, you may need to see this one more than once to get a handle on its secrets. Good luck! Opens Friday.