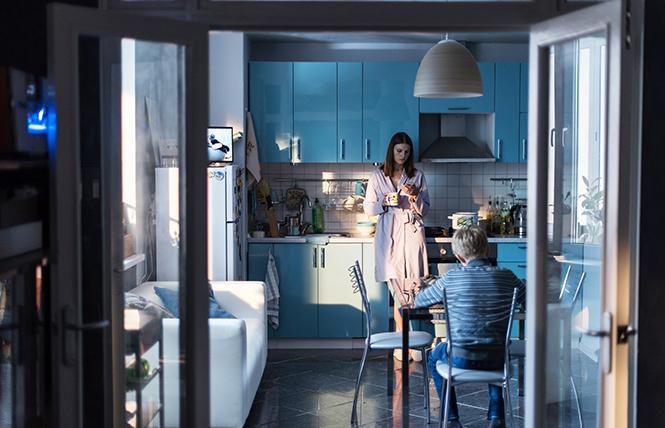 Director Andrey Zvyagintsev's bleak and emotionally harrowing domestic drama "Loveless" is Russia's Oscar candidate for Best Foreign Language Film. A Moscow couple, Boris and Zhenya, are sharing a bed in a tiny flat. In the midst of a bitter breakup, they're already sleeping with other partners. All that remains is the disposition of the apartment and the kid.

Alyosha (Matvey Novikov) is 12, blond and polite, but under the surface he's an introverted, sensitive, and tragically sad boy. While his parents hurl invective at each other as if insulting were an Olympic sport, the kid takes it all to heart as if he were the cause of this toxic marriage. Boris and Zhenya escalate their tantrums, failing to notice that their son is missing, gone for a crucial two days before they summon help. "Loveless" is a fascinating if heart-breaking study of the collateral damage inflicted upon innocent parties when adults behave childishly.

Director Zvyagintsev, who shares writing credit with Oleg Negin, cites Ingmar Bergman's 1973 Swedish classic "Scenes from a Marriage" as inspiration. In a written statement the filmmaker chastises his bickering couple for their refusal to own their mistakes, quoting Zhenya (vividly played by Maryana Spivak): "I'll change; I won't repeat the mistakes that led me to this disillusionment; I will begin anew." (Aleksey Rozin is also superb as the self-absorbed husband Boris.) As Zvyagintsev notes, "These are the thoughts of people who blame others for their fiascos. In the end the only thing you can really change is yourself. Only then will the world around you glow once more; perhaps only a terrible loss can allow this to happen."

"Loveless" shows how an authoritarian society like Russia under Putin can still produce amazing work about the human condition, in much the same way that Iranian filmmakers have been able to do under the Ayatollah. As our world is rocked by cyber-crimes of foreign tyrants, and the listless response to American school violence by gun-lobby-led politicians, films such as "Loveless" remind us that we're not alone in facing moral bankruptcy. Overseas filmmakers are also providing cinematic wakeup calls, in places where sleepers are just beginning to stir.

One of the film's most effective features is a sharply discordant soundtrack, credited to Evgeni Galperin, with sound design by Andrey Dergachey. A completely adult excursion, "Loveless" is rated R for strong sexuality, graphic nudity, language and a brief, disturbing image. In Russian with English subtitles, it opens Friday.