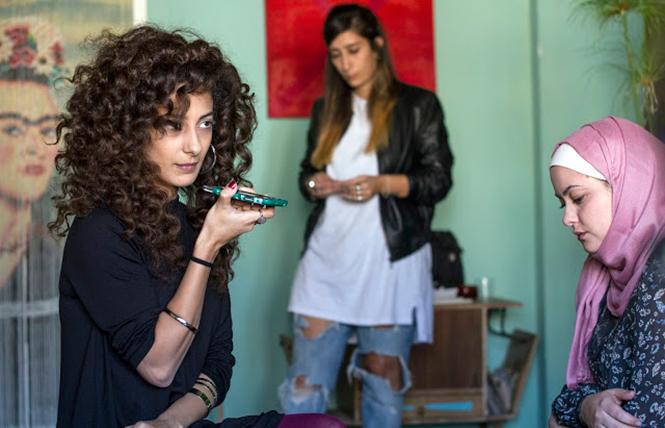 Scene from director Maysaloun Hamoud's "In Between." Photo: Film Movement

What's in a title? Usually an independent, poverty-budget comedy/drama like first-time Palestinian director Maysaloun Hamoud's "In Between" ("Bar Bahar" in Hebrew, meaning, "Neither Here nor There") will struggle to find big-screen traction apart from grass roots - in this case, Jewish film festivals. This brave and artistic entry deserves a better fate.

"In Between" opens with a comic prologue. A young woman is having her legs waxed by a grandmotherly type. The older woman offers what she seems to regard as basic survival lessons in a sexist culture - a Palestinian enclave in Tel Aviv - to a young woman just entering the dating pool. "Don't raise your voice. Men don't like women who raise their voices. Remember to always say a kind word and cook him good food. Don't forget to put on perfume, and to keep your body smooth, so that when he desires you, he'll know where to find you. In bed, do what he tells you. Don't let on that you know what you're doing."

With her first feature, Hamoud stages an edgy social comedy that takes on greater weight when one of her risk-taking heroines is assaulted and raped by a brutish social worker, a man who feigns piety but is a wolf in wolf's clothing with a short fuse.

The film opens with two young Palestinian women sharing a Tel Aviv flat. Chain-smoking Lalia (Mouna Hawa) is clearly tired of the available dating scene. The next morning she and flatmate Salma (Sana Jammelieh) have an unexpected guest, the traditionally attired Nur (Shaden Kanboura), who wants to stay with them until she can find her own arrangements. Lalia is a non-religious feminist lawyer, Salma's an underground DJ from a Christian family, and Nur's an advanced computer science student who stands out because she's opted for full Islamic female garb.

Nur's boyfriend, Wissam (Henry Andrawas), reacting to her refusal to move out from her current digs, which he considers immorally secular, throws her down on the bed and rapes her, an act the director films from the rear, upping the ante on this atrocity for both victim and audience. Later, Salma's mom witnesses her making out with a female friend, sending her pious dad into a meltdown. The film's male characters are mostly unsympathetic, with the exception of one playful gay party-boy.

Opening Friday at the Roxie, "In Between" is a realistic depiction of the conditions that prompted the current backlash against sexual misconduct. The film's intensity has reportedly inspired one Arab mayor to declare a fatwa against the filmmakers. Warnings: for a great deal of smoking, both tobacco and pot; for a brutal rape scene and a great deal of male violence against women; and for a free-spirited female couple, one of whom asks, "Does your mother know you are a lesbian?" In Hebrew and Arabic, with English subtitles.

Scene from director Maysaloun Hamoud's "In Between." Photo: Film Movement