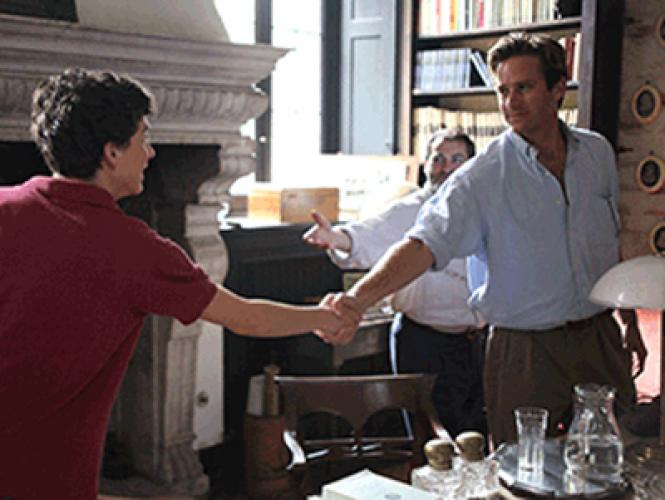 Romantic Italian director Luca Guadagnino's "Call Me by Your Name" provides LGBTQ filmgoers with a delicious boy-meets-boy romance exploring the nuances of same-sex affection over a glorious Northern Italian summer circa 1983. It opens this Friday in San Francisco, and more widely throughout the Bay Area on Dec. 22.

The set-up: the 17-year-old, skinny, curly-haired, piano-playing imp Elio (American-born Timothée Chalamet) falls for Oliver (Armie Hammer), a 6-ft., 5-in. American graduate student spending the summer as a live-in archeological assistant to Elio's dad (Michael Stuhlbarg). Before either Elio or Oliver quite realizes what's happened, the two are a virtual couple who complete more than each other's sentences. A gorgeous slice of Lombardy is the setting as the boys traverse the countryside on their bikes, opening themselves up to a summer of music, food, and romance that will produce a lifetime of memories.

American screenwriter James Ivory is the surviving half of the fabled Merchant/Ivory filmmaking team who adapted the Edwardian-era work of gay novelist E.M. Forster, including the Italian-set "A Room with a View" and the gay-themed "Maurice." Here he joins forces with author André Aciman to produce an R-rated version of the latter's novel of the same name (there's sexual contact, some nudity, and some language). The bond between Elio and Oliver is both physical - including a playful moment when Elio leaps on the back of a retreating Oliver as if the latter were a wild horse in need of taming - and surprisingly verbal.

While the erotic fireworks in "Call Me by Your Name" are adroitly delayed until deep into the film's second act, we see that despite an eight-year difference in age, young Elio is every bit a match for Oliver when he's sitting at the keyboard of his family's vacation-hideaway piano. There's a deliciously extended moment filmed off to the side of a shirtless Elio as the boy debates the merits of a cluster of Western classical-music titans with a slightly contemptuous Oliver slouched in the doorway, eager as ever to get the last word in with his gifted young soon-to-be lover.

A critic's only possible quibble is the film's leisurely pace, 130 minutes that can feel like hours except when Elio and Oliver are squared off, in either the pool or bed. But there's also the bonus that many viewers of "Call Me By Your Name" may feel, the way devoted fans of "A Room with a View" did, that the price of a movie has also purchased them a sort of short-order Italian vacation.

True fans of "A Serious Man," the Coen Brothers' wickedly cruel 1967-set satire of drugs and marital mishap in "Minnesota Nice," should recall Michael Stuhlbarg's brilliant deadpan as the earnest physics professor whose "Summer of Love" descends into a quagmire of bad outcomes, from distracted rabbis to an adulterous wife to a pot-smoking, TV-addicted teenage son who, at a particularly awkward moment, deadpans the Coen-style aside, "What's sodomy, Dad?" In "Call Me by Your Name," Stuhlbarg reveals a wholly different side, as a college-professor father who delivers a soulful monologue to his heartbroken adolescent son, just beginning to miss the man he knows may be the love of his life.

Born in Manhattan's Hell's Kitchen, young actor Timothée Chalamet is completely convincing as a seductive man-child whose thin-as-a-rail physique, tousled hair and great smile allow him to steal every scene. The film's poignant silly/sad ending gets a great boost from the filmmakers' freeze-frame focus on a heartbroken Elio, missing Oliver.

Oliver (Armie Hammer) in a scene from director Luca Guadagnino's "Call Me by Your Name." Photo: Sony Pictures Classics