Gender Showdown on the Tennis Court 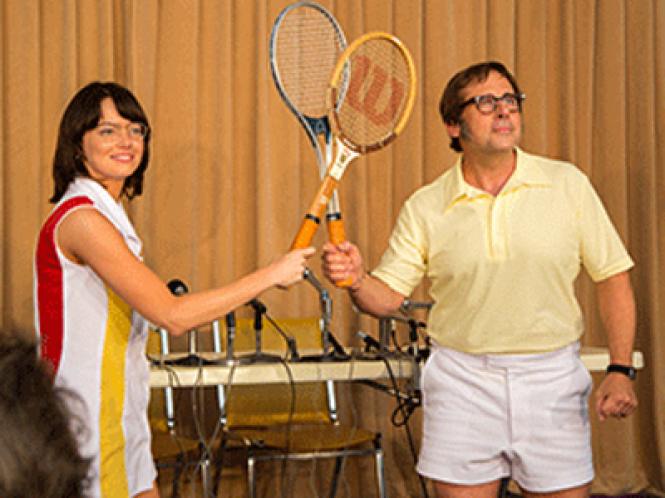 Emma Stone as Billie Jean King and Steve Carell as Bobby Riggs in "The Battle of the Sexes."  (Source:20th Century Fox)

The new docudrama "The Battle of the Sexes" flashes back 44 years to 1973. An aging tennis star, Bobby Riggs, more skilled at hustling for money and camera time than winning on the tennis courts, challenged the reigning women's champ Billie Jean King to a showdown match. The much-hyped event played out before a live crowd of 30,000 and a national TV audience estimated at 90 million. The result was a huge boost in popularity for women's tennis, which had long languished in the shadow of the men's game.

The match took place on Sept. 20, 1973, with a winner-take-all purse of $100,000. It's to the credit of husband-wife directors Jonathan Dayton and Valerie Faris that the proceedings are hugely entertaining and at least slightly educational.

The film captures some of the era's more colorful characters, including the irrepressible Howard Cosell, then just coming into his own as a vulgar but shrewd sports commentator. "Battle of the Sexes" is a glorious live-action cartoon of a movie that should score both at the box office and awards season. My chat with co-directors Dayton and Faris began with her noting how little press coverage of the 1973 event turned up as they researched.


Valerie Faris: We tried to find news footage. We got a couple of radio broadcasts, but it was very hard to find any archival footage from local broadcasts.

Jonathan Dayton: And the local broadcasts were all shot on 16mm film. We were lucky to have the ABC broadcast. It was very important to us to use as much found footage as we could, like the press conference that Billie Jean has with [Pres.] Nixon and [newscaster] Howard K. Smith. We wrote to Howard Cosell's estate and begged for his image and voice because he was an icon at the time.

Faris: Even his vocabulary, no one talks like that anymore. Just the braggadocio, that was fun, mining that commentary and placing it over the match. But the sexist overtones were surprising, even coming from Howard. Just the way he put his arm around Rosie Casals and called her "little Rosie Casals." She was small compared to him, but it comes off as a little demeaning.

Dayton: We are old enough to remember the match, and it felt like a story that needed to be told.

Faris: But when we read the story and learned about what was going on in Billie Jean's personal life, that really sold us.

Dayton: It was the perfect opportunity to work with Steve [Carell] again, to make sure that Bobby was a dimensional character. He was a fascinating, somewhat tragic character, a man who felt out of place. Bobby was a great tennis player when he was 19. But then WWII broke out, and he felt the world sort of passed him by.