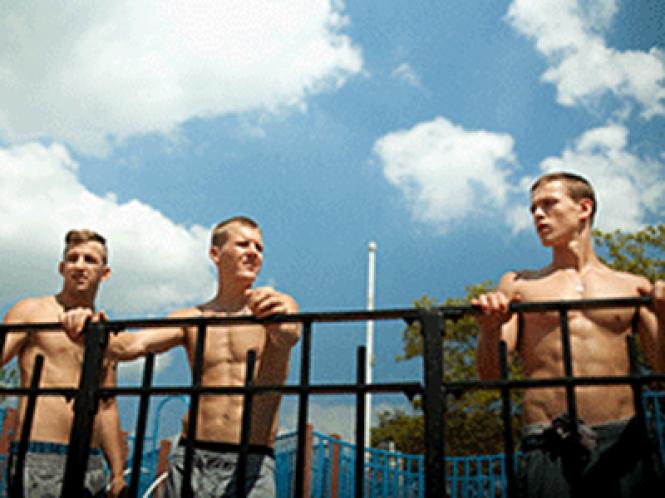 "Beach Rats," opening Friday, is a disturbing fictional shout-out to the perversities of young male sexuality.

In its opening moments, a Brooklyn native proud of his body, Frankie (a dynamite debut from Harris Dickinson), a kid with a swimmer's physique, a restless eye, an insatiable appetite for marijuana and a bottomless talent for dissembling, finds himself lying to everybody in his life, from his misbehaving loafer buddies and potential girlfriends to his recently widowed mom. The film springs from the fertile imagination of writer-director Eliza Hittman, winner of the 2017 Sundance directing prize who three years ago wowed Sundance judges with her film "It Felt Like Love."

We meet Frankie as he allows himself to be digitally pawed over by a bare-to-the-waist guy in his late 40s in a live sex chat-room.

Man: "Are you just going to watch?"

The light flips on, revealing Frankie to be a fair-skinned youth in his late teens.

The man removes his shirt. "Do you like what you see?"

"You're wasting my time."

"Sure you don't want to meet?"

Four minutes in, the action abruptly shifts to one of Frankie's favorite haunts: the Coney Island branch of the New York subway system, trains leading to the famous South Brooklyn boardwalk and Ferris wheel. Hittman visually pumps up the volume on each scene change, demonstrating both Frankie's ceaseless wanderlust and his perpetual search for new stimulants and distractions.

"Beach Rats" treats us to a cook's tour of Coney Island's tawdry amusement center, where youth mix and mingle. Frankie has a gaggle of pals hungry for pot, guys he insists are not his friends. Despite his online preference for older guys, in his Coney Island beach and boardwalk life Frankie cultivates a cute girl who is thrilled to be singled out by this hot boy. The two enjoy flirtatious verbal sparring about the merits of Coney Island's weekly fireworks shows.

The rest of Frankie's day is spent at a pot shop, at a pawn shop raising drug money, in the basement of his mom's house at his computer, and by mildly harassing his kid sister's feisty young boyfriend. Never do we observe Frankie pursuing any kind of real job.

Among the film's visual jokes are the spectacles of Frankie and his buds lifting wallets for drug money and playing the boardwalk's adolescent distractions such as bumper cars. Director Hittman works her way to confronting Frankie's real dilemma: his desire for men's bodies is no mere passing phase. In his first stab at sex with his possible new girlfriend Simone (a believable Madeline Weinstein), Frankie can't hide his lack of interest in closing the deal.

Simone: "Are you too fucked up?"

Frankie: "Yeah, kind of. Besides, I bet you didn't bring any protection."

"Usually the guy is the protection." Slipping off her bra, Simone confronts Frankie with an awkward question. "Do you think I'm pretty? I think you're very sexy." His rude reply prompts her quick exit from the bedroom with the parting line, "You're an asshole!"

In the film's most vexing sequence, Frankie and his low-life buddies mug a sweet gay motorist for drug money and the sadistic pleasure involved. It's here where the casting of the hunky, silky-smooth, pretty-boy English actor Harris Dickinson as Frankie pays big dividends, allowing at least some of the LGBTQ audience not to abandon ship. Hittman has a shrewd, sexy take on Dickinson's thin but sculpted gym body, including a shower scene where our hero carefully cleans sensitive regions of his torso.

Hittman has a skill for invoking complicated queer stories that arise out of the prickly urban jungle. Frankie is far from noble with any of the faces he presents to his not-so-liberal slice of South Brooklyn. He and his scam-artist pals live by a rigid macho code that has no "get out of jail" card for queers. It's clear that gay boys rate only abuse.

One of the best of many plot reversals is Simone's decision to dump Frankie after a weird night out when he flips out on drugs. She confronts him with the bad news at the dress shop where she clerks.

Simone: "I don't think we should see each other."

"Because you're a fixer-upper."

"What does that mean?"

"It means you need a lot of work."

"So you don't want to see me anymore?"

The story climaxes on an unsettling burst of homophobic violence against a sweet gay boy whose appearance we hope may allow Frankie to clean up his act, cleanse his soul, and stake a claim for real freedom in a morally confused Brooklyn landscape. Sadly, at film's end, our anti-hero is projected against a burst of fireworks, a showcase of light that does not offer this troubled boy a way to come home.