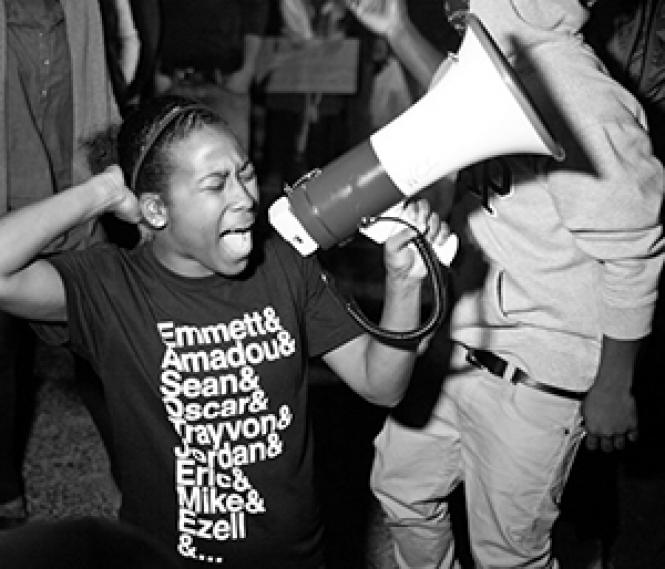 In the powerful new doc "Whose Streets?," first-time filmmakers Sabaah Folayan and Damon Davis demand we shed our mental baggage and assume the fears and risks of being a working-class African American trying to survive. We're in racially polarized suburban St. Louis, MO, 80% black but politically controlled by the white minority and a police force equipped with tanks and other Pentagon-supplied counter-insurgency weapons.

The time is 2014, the place Ferguson, MO, six-and-a-half square miles of public housing units and fast-food outlets. On the afternoon of Aug. 9, 2014, Darren Wilson, a 28-year-old Ferguson police officer responding to reports of an armed robbery at a QuickStop convenience store, shot and killed Michael Brown, an 18-year-old recent high school graduate accompanied by his friend Dorian Johnson. These facts are crucial to understanding the drama that unfolds in "Whose Streets?," but they are not the subject of this incendiary film, a video-diary-like record of how a few representatives of Ferguson's African American community banded together to demand accountability from the police army.

"Whose Streets?" does not observe the rules and decorum of network news reports. The views expressed come from folks who do not normally make the cut for "film at 11." We see a protestor shouting, "This is not your daddy's civil rights movement," and a female activist wearing a "Who gives a fuck about voting?" T-shirt. The filmmakers stress that their story is raw and about the sense of powerlessness experienced by millions of working-class black Americans who do not see themselves as disciples of Dr. Martin Luther King's nonviolent Civil Rights Movement. After many days of street protests that followed the police shooting of Michael Brown, we hear a police SWAT team commander yelling at the protestors from the safety of a tank, "Return to your homes!," only to produce the agonized reply from a community resident, "We are home!"

"Whose Streets?" doesn't spend much time getting the official line from local authorities. Pointedly, Pres. Barack Obama is seen tacitly backing the actions of Ferguson's white police establishment. One wonders why our first elected black national leader didn't follow the example of Presidents Kennedy and Johnson and federalize the Missouri National Guard.

For LGBTQ audiences the heart of the film lies with the story of Brittany Farrell, a young nursing student who is both preparing her young daughter in how to think for herself and faced with putting her career and pending same-sex wedding on hold while she deals with the chaotic details of everyday activism.

The film's release coincides with the 50th anniversary of the Detroit riots. It will also resonate with San Francisco veterans of the White Night Riots following the exoneration of Dan White, the ex-cop assassin of openly gay Supervisor Harvey Milk and Mayor George Moscone. It's an example of the full-immersion style of filmmaking pioneered by doc veteran Frederick Wiseman, but goes well beyond Wiseman in that it's definitely dedicated to African American liberation. With its rough language and firm point of view, "Whose Streets?" will not likely air on public television. It demands to be experienced in theaters where audiences can chime in with their own views and cheers.

My only real quibbles concern the absence of a map to pinpoint Ferguson's place in the greater St. Louis metro area, and of a timeline to offset the chaos and sense of cinema vertigo that even the best nonstop verite filmmaking can produce.